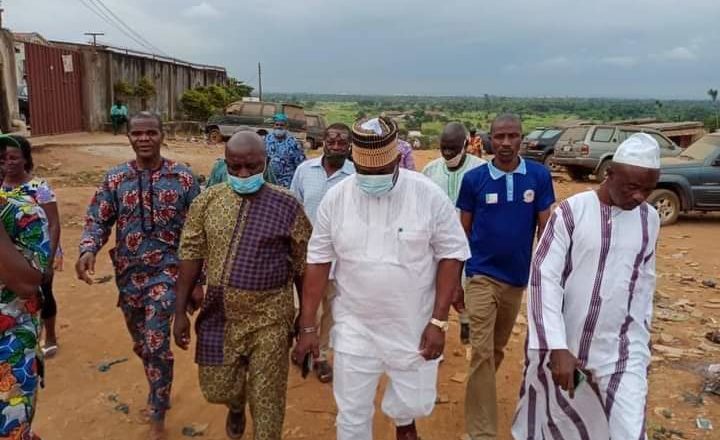 The Chairman, Transition Committee, Ifo Local Government, Hon. Fola Salami today went on assessment tour to Community High School, Ishasi, Akute to see how to proffer lasting solutions to the issue of accessible road to the school by pupils, teachers and other management of the school.

In a letter, dated 13th July, Denro/Ishasi Area Community Development Committee (CDC) had written to the Chairman of the local government to seek government intervention in helping to construct access road to the school.

The roads leading to the Community school has been taken over by floods which led the community to temporarily move the pupils to Zumurat Islamiyah(Z I) Primary, another school at Akute.

Upon receiving their letter, Hon. Fola vowed to step in and he immediately reached out to Mrs Ronke Soyombo, Special Adviser to the Governor, on Primary and Secondary Schools who also promised government intervention in doing the needful by constructing the access roads leading to the school within shortest period.

The community school has eight classrooms, two staff rooms and one principal office room making the total rooms 11. This school was established during the administration of Otunba Gbenga Daniel.

The leaders of the community present during the assessment were thankful for the visit of the chairman hoping it result in fruition.