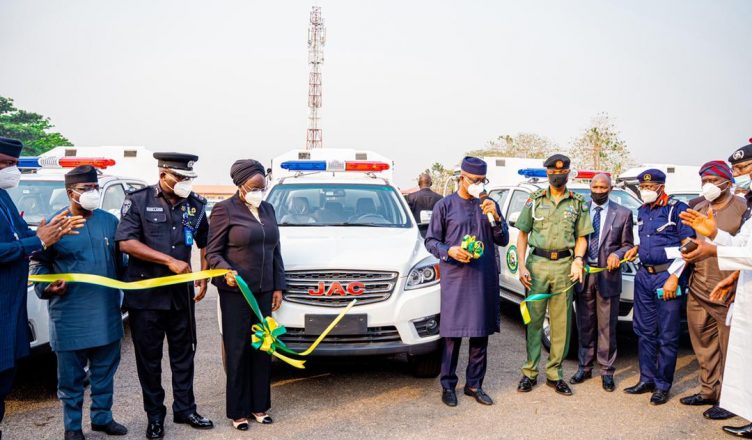 Governor Dapo Abiodun of Ogun State has handed patrol vehicles over to the Joint Security Intervention Squad(JSIS) to secure lives and property in Yewa (Ogun West Senatorial District) axis of the state against further attacks by suspected killer herdsmen.

JSIS was constituted two weeks ago by the state government in response to the recent farmers – herders clashes in Yewa Ketu area and members were drawn from the Nigeria Army, Nigeria Police, Department of State Security Service (DSS) and Nigeria Security and Civil Defence Corps(NSCDC).

The security vehicles comprising 10 operational vans and 20 motorcycles which were equiped with communication gadgets to enhance operations and received by Deputy Commissioner of Police in charge of JSIS Operations, DCP Ahmed Abdullahi at a ceremony attended by the security chiefs in the state.

Abiodun charged operatives of the JSIS to make optimal use of the equipment for the protection of the people of the state, hinting that personnel of the South West Security Networks (SWSN) code named “Amotekun” will soon be deployed to reinforce JSIS.

He emphasised that equipping the taskforce with necessary working tools is more important than setting it up.

The governor however, admonished the people of the state to stop ascribing crime to any ethnic nationality, but rather address and treat criminals with the appropriate provisions of the law.