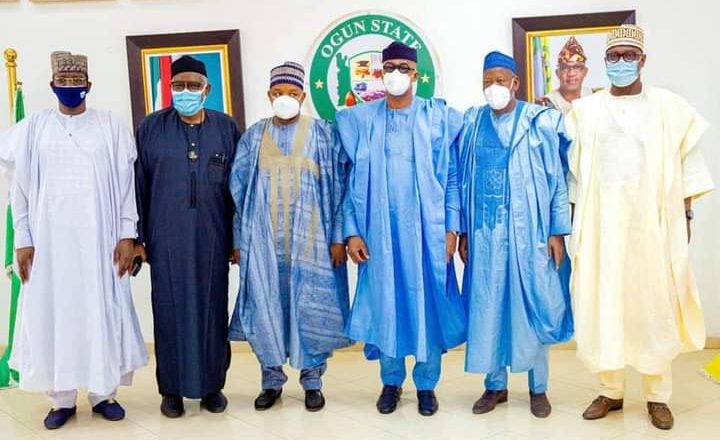 Ogun State Governor, Prince Dapo Abiodun, has said it was time for urgent and pragmatic steps should be taken in settling the farmer/herder clashes to guide against it snowballing into major crisis.

Governor Abiodun stated this at a stakeholders parley on farmers/herders conflict held at the Obas Complex, Oke-Mosan Abeokuta, wondered why people who had lived together for years are now turning against each other.

“It has become worrisome that people who had co-existed peacefully for years are suddenly at each other’s throat on account of sources of livelihood. From time immemorial, herders and farmers have peacefully cohabited. And have continued to find joint solutions to their mutual challenges, occasional frictions and misunderstandings and sorted these differences amicably.

While assuring that no stone would be left unturn in securing the people, the Governor maintained, “Our first priority in Ogun State is the safety of lives and property of everyone in our dear State irrespective of the circumstances of their birth or religious leaning. Let me restate that we will not compromise.

“There is a need for collective action between all of us, whether as native farmers; cattle owners; herders; local community leaders; security agents etc. to rid our dear State of these criminals.

“We must use the opportunity of this parley to tell ourselves the truth, not necessarily by apportioning blame, but definitely we must come up with more practical and viable recommendations that will further cement the peaceful coexistence that we have always had in Ogun State”.

On his part, the Governor of Kano State, Dr. Abdulahi Ganduje, attributed the farmer/herder clashes to encroachment on cattle routes, poor education and poverty among the herders among others, called for the stoppage of moving cattle from the north to the south.

Ganduje described the crisis as an economic issues that are turning into tribal and religious issues, calling on the Federal government to assist herders to transit from pastoral to modern ranching.

Governor Abubakar Sanni of Niger called for sincere actions to address the problem before it takes a new twist, noting that setting up of ranches was the best way to stop the crisis, his Zamfara State counterpart, Alhaji Bello Mattawale, recalled the activities of bandits in his state,regretted the loss of lives and destruction of properties from the clashes.

Kebbi State Governor, Atiku Abubakar Bagudu, said though Nigerians have a right to live in any part of the country, there must be ways of identifying them and regulating their activities for peaceful co-existence.

Chairman, Progressive Governors Forum, Alakunrin Rotimi Akeredolu, called for a situation where the herders would stay in their respective states and allow those who need their cattle to come and buy from them.

He said the steps taken by Southwest Governors are not targeted at any group, but an attempt to prevent insurgency in the region, calling on the leadership of Miyetti Allah to expose criminals among them so as not to give them bad name.

Chairman, Ogun State Council of Obas and the Awujale of Ijebuland, Oba Sikiru Kayode Adetona, said discussion at the parley be neat, clear and understandable to the people saying the council support every steps taken by the government in solving the crisis.

The Olu of Ilaro and Paramount ruler of Yewaland Oba Kehinde Olugbenle cautioned the Miyetti Allah leadership to guide their alterances in the media as we as reference from threatening his people, while the Onimeko of Imeko alleged that a lot of arms and ammunitions have been brought into Yewaland by foreign pastoralists, drawing government attention to the Imeko Forest Reserved which has been turned into hidout by criminals.

President, Miyetti Allah Cattle Breeders Association of Nigeria (MACBAN), Mohammed Kiriwa, represented by the National Secretary, Uthman Ngelxema, noted that the crisis was caused by foreign herders as their Nigerian counterpart have always lived in peace with their host communities, while the Chairman of the State All Farmers Association of Nigeria, Chief Segun Dasaolu, revealed that there has been strong collaboration with some herders who has lived in the south west for more than 200 years, adding that it was time to combine forces to tackle the menace.

Rounding off discussions, Governor Abiodun said the Federal government needed to take a second look at the ECOWAS treaty, as it was meant for people’s and not cattle movement, adding that a treaty was expected to be signed between the herders and the State government on what has been discussed agreed and how to about it.