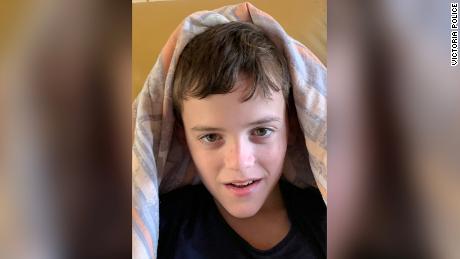 Will Callaghan, 14, has been found after being missing near a mountain in Australia for two days.
A 14-year-old boy who went missing in freezing conditions in Victoria, Australia, has been found.

Will Callaghan, who has nonverbal autism, got separated from his family on Monday near the summit of Mount Disappointment, CNN affiliate 9News reported. He had raced ahead of them as they walked toward the mountain.
Victoria police asked local residents to help draw him out of the bushland by playing music from the show “Thomas the Tank Engine” and leaving out food and water for him.
On Wednesday, they announced that a volunteer, identified by 9News as Ben Gibbs, had located Will.
The teen was reunited with his family on Wednesday after a volunteer found him in the bushland.
Gibbs told 9News that he was very familiar with the terrain, and found the boy after going a bit farther past the search area scanned by rescue crews.

“He was about 15 meters from me just standing there,” Gibbs told the station. “He was really angelic, just standing and looking.”
Gibbs said Will wasn’t wearing any shoes, so he put some socks on him. He also gave the boy some chocolate and talked to him about Thomas the Tank Engine.
Will was reunited with his parents and taken to a tent where he was treated by paramedics. He was later taken to a hospital, where an official said he was doing relatively well and should be able to return home by Wednesday evening.
Penny Callaghan thanked everyone for their help in finding her son. She told reporters that Will was “quite calm,” considering the situation, but that he was also communicating. “He’s confused and he’s scared.”
“I can’t imagine what he is going through,” she said. “I’m just so grateful and so relieved. He is just a very special person.”