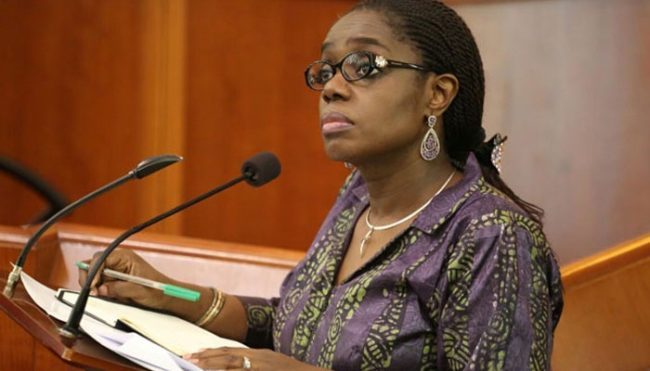 We reported earlier that PREMIUM TIMES had, in an exclusive, reported how Mrs Adeosun tendered a forged NYSC discharge certificate at her appointment as minister in 2015.

Born and educated in the United Kingdom, Mrs Adeosun had skipped the youth service mandatory for under-30 Nigerian graduates. However,when she was to be nominated for a public office, she came up with an NYSC certificate purported to have exempted her from the exercise.

PREMIUM TIMES uncovered the forgery scandal in a July 2018 report, which triggered a probe by a panel set up by President Muhammadu Buhari.

Although the probe report was never made public, it led to Mrs Adeosun’s voluntary resignation from office on September 14, 2018..

In her resignation letter made public in a statement, Mrs Adeosun admitted that the NYSC certificate was forged, but claimed she was not aware it was counterfeit until the PREMIUM TIMES report.

However, a recent judgment she obtained from the Federal High Court in Abuja, ruled that she did not need to have participated in the youth service.

Mrs Adeosun claimed to have been vindicated, even though the verdict did not decide on the unchallenged evidence of certificate forgery against her.

In the suit calling for Mrs Adeosun’s arrest and prosecution, the trustees of Global Integrity Crusade Network (GICN) sued the Director-General of SSS, Yusuf Bichi; the Inspector-General of Police, Baba Alkali, and the ex-minister as defendants.

The suit marked FHC/ABJ/CS/732/2021 was filed on behalf of the plaintiff by its lawyer, Esther Iorhuna.

The plaintiff, through the suit, sought among others, an injunction restraining Mrs Adeosun from travelling out of the country to take refuge in another country.
It also sought a declaration that the DG of SSS and the IGP “are under legal duty to arrest and prosecute Mrs Kemi Adeosun, for fraudulently using a fake National Youth Service Corps (NYSC) Exemption Certificate and intentionally giving false evidence before Ogun State House of Assembly”.
It also sought a declaration “that the action of the SSS and the police constitute negligence of duty by “refusing, failing and or neglecting to arrest and prosecute Mrs Adeosun,” who is sued as 3rd defendant in the suit.

It also prayed for, “An order of mandamus compelling the 1st and 2nd defendants to perform their legal duties under Sections 1, 2 (3) and 8 of the National Security Agencies Act, 1 and 86 read together with Instrument No. 1 of 1999 as well as section 4 of the Police Act, 2020 by forthwith arresting and prosecuting Mrs Kemi Adeosun.”