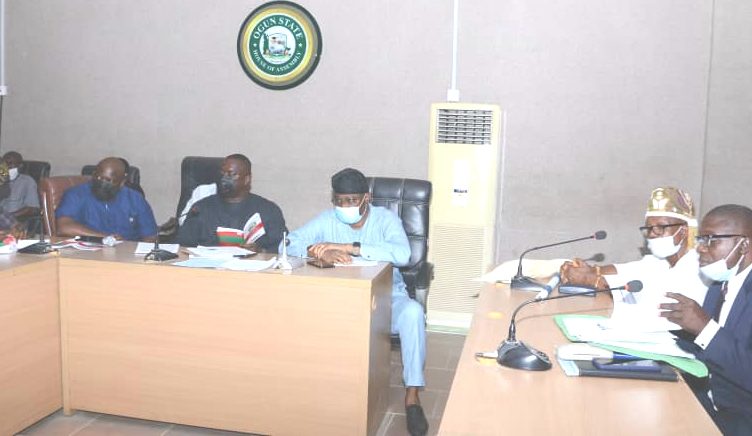 Ogun State House of Assembly has engaged the Oniraniken of Iranike, Oba Adewale Adeniji over petitions written against him by the Olumeru Adeyemi Sodiya Family land, Idarika Kaniyu Village through Agerige Village by Okerala farmland in Sagamu on alleged unlawful invasion of their parcels of land; thus ordered him to produce the survey plan on the said judgement within two weeks.
The Assembly through its Committee on Lands and Housing led by Hon. Damilola Soneye issued the order during a meeting which had in attendance, the Ewusi of Makun Sagamu, Oba Timothy Oyesola Akinsanya and Oba Adeniji as well as other concerned parties at the Assembly Complex, Oke- Mosan, Abeokuta.
The House Committee stressed the need for Oba Adeniji to provide the survey plan upon which the judgement was based for authentication by appropriate government agencies to assist the Committee to determine the areas covered by the said judgement; warning the monarch not to go beyond the two-week deadline, after failing to appear before the Committee on two previous invitations.
Soneye in company of other members including Honourables Kemi Oduwole, Solomon Osho, Abdul Bashir Oladunjoye, Yusuf Adejojo, Sola Adams, Atinuke Bello and Kunle Sobunkanla, also warned that the Assembly would not hesitate to recommend to the Ministry of Local Government and Chieftaincy Affairs to invoke relevant sections of the State Chieftaincy Law as well as Anti-land grabbing Law, 2016 on anyone including traditional ruler(s) caught in the act of land grabbing and or forcible entry on landed property in the State.
The Chairman consequently directed Oba Adeniji, who was relying on a court judgment obtained in 2018, to desist from unlawful land occupation, adding that no one should threaten the peaceful co-existence of residents in the State under the guise of taking possession of landed property through an enforcement of court judgement.
Quoting the relevant provisions from the State Land Grabbing Law, Soneye cautioned that “any traditional ruler found aiding the activities of land grabbers/Ajagungbale to pose threat or unleash terror on the people shall also be treated as land grabbers/ajagunbale and be treated as such. Any person or authority including a Traditional Ruler found guilty of any offence in this section shall in addition to any punishment prescribed in this Law be liable to imposition of any other sanction, punishment, or liability that may be imposed by any other law including the Chiefs Law or any other Law for the time being in force.”
Also, the Lawmakers resolved a petition written by one Tunde Ologunde and Co against (the Oniraniken) Oba Adeniji on the allegation of forcible entry of landed property, received on January, 6th 2021, where the Lawmakers directed that all illegal occupants of Ipa Village farmland in Makun, Sagamu including one Wale Abiodun, should immediately vacate the village land and subsequently desist from conducting themselves in violent manner as Oba Adeniji had admitted before the House Committee that the judgement he obtained did not extend to Ipa Village, warning that anyone found to be disturbing the peace in the area would be dealt with according to the law.
In his remarks, the Ewusi of Makun Sagamu, Oba Timothy Oyesola Akinsanya, appealed to the Assemblymen to evoke relevant sections of the State Law to restore peace and save the residents of the affected areas from incessant harassment and intimidation by land grabbers, noting that he had confidence that the legislative arm would do justice on the matter.