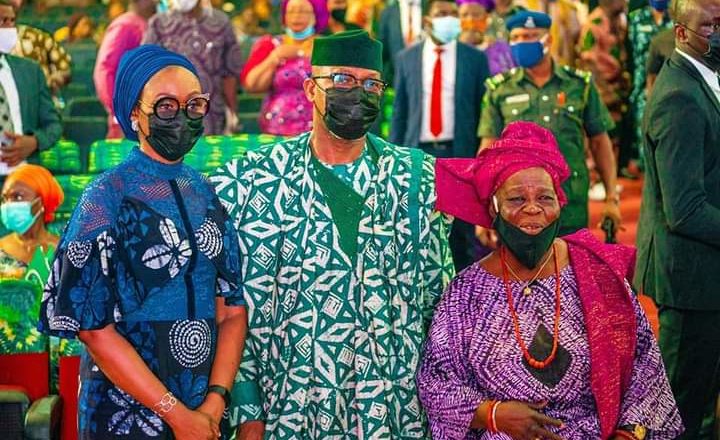 Ogun State Governor, Prince Dapo Abiodun, has called on the Federal Government to adopt Adire as an attire for national events and as a cultural symbol in the nation’s foreign missions, to further promote the rich culture of the nation to the outside world.

Governor Abiodun made the call at the official launch of Ogun Adire Digital Market Place at the June 12 Cultural centre, Kuto, Abeokuta. He also advocated the making of ceremonial dress from Adire for the nation’s athletes taking part in International Sporting activities.

Already, the Governor said, starting from next term, adire fabric would become official school uniform in all public schools in the State.

“I want to call on all stakeholders in the information, culture and tourism sectors to partner with us in promoting this national heritage. I want to particularly call on our Honourable Minister of Information and Culture to help promote the Adire at the National level. For example, members of the Federal Executive Council and other top government functionaries can adopt the Adire for National events.

“Our Foreign Missions could also adopt the Adire fabric as a cultural symbol that will further project our rich culture to the outside world. Same thing could also be done by our Federal Ministry of Youth and Sports by making the ceremonial dress of our athletes from local fabrics such as our Adire. This will go a long way in promoting the local contents and give expression to President Muhammadu Buhari’s Administration’s “produce what we use” and “grow what we eat” policies”, he noted.

Abiodun maintained that the event was to provide a global platform for the marketing and distribution of Adire fabric and it’s entire value-chain to the global markets and serve as a melting-pot for all participants in the entire value-chain and provides opportunities for a wider coverage of the market for people to reach out to vendors and transact businesses by logging into the Adire Digital Mall.

He said plans have reached advanced stage to make Adire an important aspect of every day life, as all top government functionaries in the State now wear Adire on Fridays, just plans are underway to make the Adire part of School uniform, saying it would empower more people and further stimulate the Adire economy.

The Governor called on Investors to take advantage of the new Adire Ogun Digital Market Place by partnering and intensifying their collaboration with the State in the development of arts, culture and tourism.

Minister for Information and Culture, Alhaji Lai Muhammed, in his address applauded the state for making efforts to showcase adire in the international arena, adding that it was in line with the Federal government diversification policy.

He said the Adire Ogun Digital market place, would serve as a veritable platform to marketing local fabrics, create employment and promote the nation’s cultural heritage, calling stake to make the best of the opportunity.

Wife of the Governor, Mrs Bamidele Abiodun described the Adire Ogun Digital market place as a consolidation of centuries of creativity and enterprise which would benefit more women when exposed to national and international market, calling on producers to always think about the environment, by disposing used chemicals properly.

Commissioner for Culture and Tourism, Dr. Oluwatosin Taiwo, opined that tourism, apart from creating jobs, could also generate revenue which would assist the socio-economic development of the state.

He said the State was blessed with world class tourism potentials that would generate foreign exchange, adding that the history of Abeokuta would not be complete without adire. He observed that depite influx of foreign fabrics, Adire was still making huge impact on the State and country.

Speaking, the Alake of Egbaland, Oba Oludotun Gbadebo, who described adire as foreign exchange earner, also harped on proper handling of chemicals used in producing adire, as it was dangerous and harmful to health.