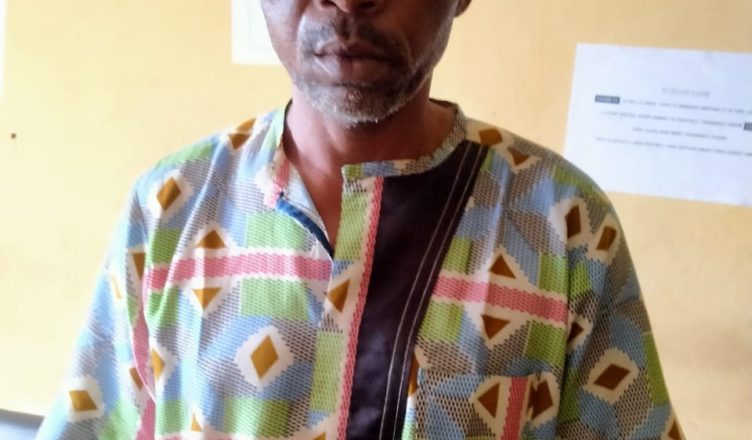 Segun Taiwo,a 48 years old butcher in Abeokuta have been arrested by the police in connection with the death of his 50 years old side chick Abimbola Olusola, whose corpse was found by the road side close to the Neuro Psychiatric Hospital Aro area of Abeokuta,Ogun state.

According to police report,the suspect was apprehended by the police attached to Lafenwa divisional headquarters after their attention was drawn to a corpse lying on the road side.

The DPO of the Lafenwa Police division despatched his men to the scene, where the corpse was recovered and deposited at the mortuary.
The case was subsequently transferred to state criminal investigation and intelligence department on the order of the Commissioner of Police CP Lanre Bankole for discreet investigation.

Police investigation eventually led to Obada oko area, where the suspect was arrested.
On interrogation, the suspect first denied knowing the deceased, but when evidence linking him with the deceased which has been at the disposal of the policemen before his arrest was tabled before him, he confessed.

In his confession, he told the police that he has been dating the deceased since last year, and that he invited her to his house on Sunday October 31st to pass the night with him, since his wife is not at home. It was around 3 am that the deceased started showing signs of sickness after they had sex together, and before he could do anything, she gave up the ghost.
The suspect stated that out of fear he took the corpse in his car and drove it to Aro area where he dumped it .

Meanwhile, the commissioner of police who commended his men for the professional manner in which they carried out the investigation has directed that the suspect be charged to court as soon as investigation is concluded.

He therefore appealed to members of the public to always make their whereabouts known to at least one person whenever they have cause to go out of their houses.