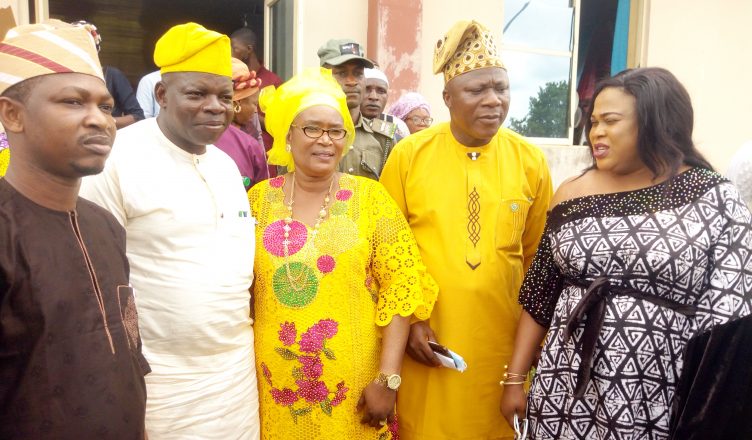 The member of Ogun state House of Assembly representing Egbado South Constituency,Hon Bolanle Lateefat Ajayi have empowered the people of her constituency with cash gift,promising to do better when the economy of the state is back on its feet.

This was done yesterday in an elaborate ceremony in Ilaro at the present of party leaders and political stakeholders.

Hon Ajayi said it had been her desire to fulfil her promise(which she made to her people during campaign), especially at this critical time.

She added that since the state have not approved any constituency project for the people,such gesture will go a long way to get the need of the people met.

Hon Ajayi said,”I prefer to give the people cash gift as it will help them in their various businesses or financial commitment,as it was distributed across the wards. The essence is to help the people and give them a sense of belonging in this administration. The governor,Prince Dapo Abiodun may not come down in person to empower the people,but this gesture is a prove that our party APC is a progressive party that put the welfare of the people mind.”
The Speaker of the Ogun State House of Assembly,Hon TAIWO Olakunle Oluomo,who was represented by the Deputy Speaker,Hon Akeem Agbolade Balogun said the gesture was laudable, calling on other law makers, philanthropists to emulate.

One of the beneficiaries,Mrs Adijat Sarumi appreciated the gesture of Hon Ajayi,called on the state government to come up with similar projects for the people.
Another beneficiary, Mr Abdullahi Oladipupo thanked Hon Ajayi,prayed that the Lord will bless her and all that concerns her.

He said if such gesture could be done often it will reduce the level of poverty in the Society.
Among other dignitaries at the event include Hon Atinuke Bello,Chief Whip of the State House of Assembly, Hon Wahab Haruna Abiodun (Egungbohun) representing Egbado North 2, Chief Mrs Titilayo Ajanaku and many others.