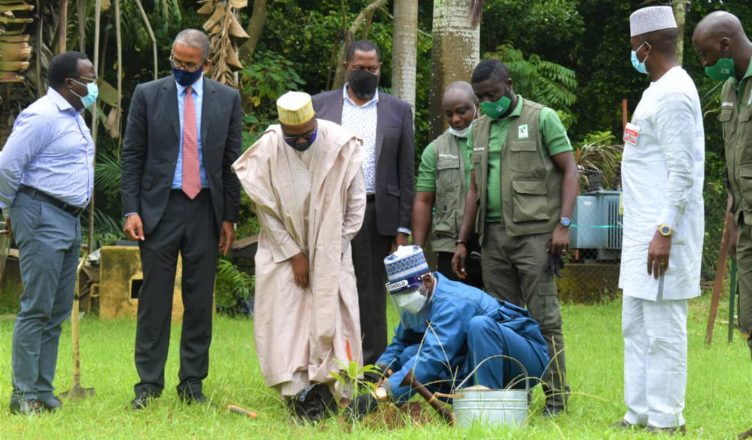 The Minister of the Environment, Dr. Mohammad Mahmood Abubakar during his working visit
to the headquarters of Nigerian Conservation Foundation (NCF), Lekki Conservation Centre
commended the efforts of NCF in salvaging the environment and partnering with the Federal
Government of Nigeria through her ministry in protecting and restoring the environment for the
benefits of the people.
He made this known in his statement while appreciating the Foundation for not only being heavy
in terms of public awareness campaign and implementation of projects but also as a reliable partner
in the environment sector over the years.
Speaking further on the achievements of this present administration, he said “We have built and
we are building numbers of recycling plants that will take used plastics, wash and make all kinds
of things out of them. For example pallet, and this pallet will be used to make interlock, the
interlock made from plastics will even last longer than the brick interlocks”
He added that the present government has been able to move the forest cover of the nation from
4% to 6% and working towards restoring it to 25% as recommended globally
The Minister shortly after his arrival, went on a guided tour of the Centre. He also experienced a
thrilling moment on the longest canopy walk in Africa. In his company was Prof. Adeshola
Adepoju, Chairman, National Forest Trust Fund; Mr. Charles Ikeah, Director, Pollution Control &
Environment Health, Federal Ministry of Environment among others.
As an action Minister, Dr. Abubakar rounded off the day with a planting of Ekki tree (lofira alata)
within the centre.
The Minister was received by Chief Ede Dafinone, Chairman, National Executive Council of NCF;
Dr. Muhtari Aminu-Kano, Director General of NCF; Mr. Tom Akagbosu, a representative of
Chevron Nigeria Ltd and NCF Management staff.