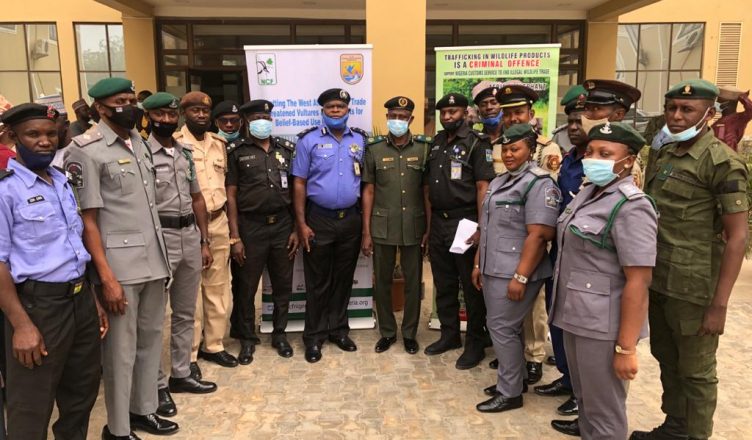 The Nigerian Conservation Foundation (NCF) organised workshops tagged ‘Regional Common Action Plan on Combatting Illegal Wildlife Trade (IWT) in Abeokuta and Kano on 26th and 30th March respectively.
The objectives of the workshops were to improve awareness on the Illegal Wildlife Trade issue with vulture as target species, to bring to front burner, the common challenges and limitations against enforcement of wildlife laws in Nigeria, sensitize the enforcement and border control agencies on the need to get more knowledge, understand the law and intensify efforts on enforcement.
Illegal wildlife trade as fourth transnational crime in global rating poses threats to biodiversity comprising iconic animals such as elephants, rhinos, leopards and pangolins while birds such as vultures and African grey parrot are not exempted from this threat.
It was revealed that the Nigeria Customs Service, made several seizures by profiling the containers, elephant tusks, pangolin scales, rhino horn. It was also revealed that majority of 1,169 forest reserves in Nigeria suffer neglect, degradation, poaching and are not properly managed.
Some of the challenges against curbing the menace of Illegal Wildlife Trade include shortage of forest guards, high rate of poverty among forest dwellers, over-dependency on the forest resources, lack of modern facilities and equipment to manage the forests and lack of environmental education among Nigerians.
Reviewing the existing laws to make penalties stiffer and enhancing the capacity of law enforcement agencies in proper prosecution were identified as major ways to combat transnational and national illegal wildlife trade in Nigeria. Environmental education, increased awareness campaign, training and re-training of security agents and more were other solutions proffered at the workshops.
The workshops had in attendance representatives of the Judiciary, Nigeria Police; Nigerian Security and Civil Defence Corps (NSCDC); Nigeria Immigration Service; Nigeria Custom Service (NCS); State Departments of Forestry; wildlife conservationists among others
The workshops were highly enriching with presentations from seasoned facilitators such as Dr. Muhtari Aminu-Kano, Director General of NCF; Dr. Joseph Onoja, Director of Technical Progs; Mr. Timothy Daniel John, CITES National Focal Point; Mrs. Abimbola Animashaun, NCS WCO Regional Intelligence Focal Point (West Africa) on IWT; Mr. Joseph Assam, Conservator of Parks, Old Oyo National Park; NESREA Zonal Coordinators Southwest and Kano State and others.
The project is sponsored by US Fish and Wildlife Service and BirdLife International.