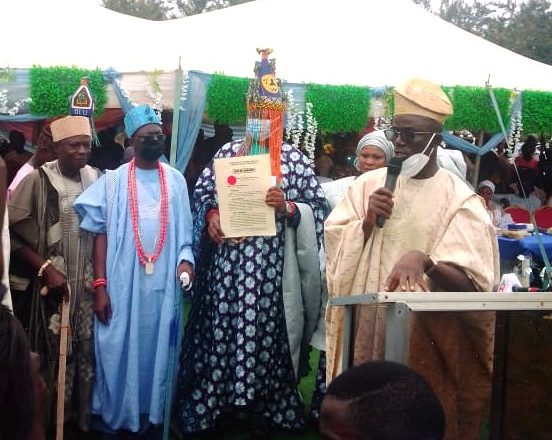 …assures the people Of peace, development,unity.

The newly crowned Oba (Rtn) Kuoye Lukman Olalekan Adeleke, Fcim., Ilufemiloye, Oyesokun V, the Olu of Imasailand in Yewa North Local Government of Ogun State has been urged to strive towards the development of Imasayi town, and also work towards the peaceful coexistence amongst the people of the area.

This advice was given on Thursday, August 26, 2021 by the Hon. Commissioner for Local Government & Chieftaincy Affairs, Hon. Afolabi Afuape at the presentation of the staff of office and instruments to Oba (Rtn) Kuoye Lukman Olalekan Adeleke, Fcim., Ilufemiloye, Oyesokun V.

Hon. Afuape also urged the new Olu of Imasailand to cooperate with other traditional rulers in Yewaland, most especially, Oba Kehinde Gbadewole Olugbenle, the Olu of Ilaro & Paramount Ruler of Yewaland and members of the Yewa Council of Traditional Rulers.

The Commissioner implored Oba Kuoye to see his ascending the stool of his forefathers as a calling to make sure peace reign in his domain, Yewaland and Ogun State as a whole.

Afuape further advised the new Kabiyesi to also give his unflinching support to the administration of Governor Dapo Abiodun of Ogun state with a view to justifying the confidence reposed in him.

The Ogun State Commissioner equally congratulated the Royal family of Oyesokun, people of the ancient town of Imasai and Yewaland in general on the successful installation of the new Olu of Imasailand, praying that God in His infinite mercy will continue to guide and protect the monarch and the people of the town.

Earlier in his speech, the new Olu of Imasailand, Oba Kuoye Lukman Olalekan expressed his gratitude to Governor Dapo Abiodun of Ogun State and the entire members of Ogun state Executives Council for the love and support given to him and the people of Imasai while he rallied support for the socio-economic development of the ancient town.

His words, “I want to specially appreciate our indefatigable Governor, HE Prince Dapo Abiodun, MFR, Deputy Governor Engr. Noimot Salako-Oyedele, the Executive Council members, especially Hon. Commissioner for Local Government & Chieftaincy Affairs, the Host Commissioner – Alhaji Jagunmolu Akande Omoniyi, Commissioner for Housing and the Co-Host Commissioners, Forestry, Budget & Planning and Tourism, they have all proven their worth as Ogun West Senatorial District Ambassadors in the State Executive Council, thank you all for standing firm for what you believed in. May Almighty God grant you all your heart desires in your future political endeavours.

“It will be a great mistake for me if I fail to appreciate the Executive Governor of our State HE Prince Dapo Abiodun, MFR for his giant development strides, especially the Imasayi-Igan-Ayetoro road. Also the Governor’s quick response to the security challenges in Yewa North Local Government and the State in general cannot be overemphasized. The good people of Imasayi also appreciate Governor Abiodun’s intervention at resolving the crisis and kidnappings around the local government area. Governor Abiodun’s gesture for the appointment of Engr. Temitope Kuyebi as Chairman, Ogun State Signage and Advertisement is a testimony of his affection to us in Imasayi and Yewaland as a whole. Thank you sir, Your Excellency.”

Oba Kuoye also thanked the Olu of Ilaro & Paramount Ruler of Yewaland, HRM Oba Kehinde Gbadewole Olugbenle, Agunloye IV who according to him has been supervising this ancient town during the interregnum, saying, “My prayer to Oba Olugbenle is to strengthen him, in order to do more for the entire Yewaland as the head of the traditional institution. May almighty God reciprocate your good gestures in folds.

“I do not think closing this address without appreciating the roles played by my brother/mentor- Chief Akeem Adigun, Don Kim (SOCOPAO) behind the scene is worthy for mentioning. Thanks for your moral supports sir. You have also proven that you are true son of Yewaland, Almighty Allah will reward you immeasurably and give you long life to reap the fruits of your hard earned labour, Insha Allah.”

The new Olu of Imasai stated further that as the custodian of Imasayi tradition and administration, distinguished Imasayi indigenes within and in the diaspora shall be involved in the total development of the town, while he assured them of his commitment to the progress of Imasai town, saying “The unblemished track record of my performance where I have worked, both in the private and public sectors shall be brought to bear one the town.

Going down memory lane, Oba Olalekan Kuoye said, “Today marks the beginning of another royal history of Imasayi after the demise of HRM Oba Gbadebo Idowu Oni, Aribio III who joined his ancestors on 8th July, 2020. Baba’s footprints will remain indelible in the history of Imasayi and Yewaland at large and whoever that writes Imasayi history without mentioning Oba Gbadebo can be likened to an ingrate.

“Oba Gbadebo’s sojourn on the throne of his forefathers was meritorious and his legacies are still feasible for everyone to see; Oba Gbadebo must be immortalised. I promise to do that very soon after due consultations with Imasayi Elites. May almighty God be pleased with his soul and uphold the family and the town he left behind, Amen.

“Immediately after the completion of the burial rites of the late Oba Gbadebo, the then constituted Imasayi Regency Council was gazetted and was given three months to conclude the processes of the selection of new Oba, but unfortunately they could not meet up with the three months deadline as stipulated in the gazette and Ogun State Chiefs Law, 2006.

“The Regency Council however wrote to Oyesokun Ruling House, Oke-Ilemo to notify them that according to the Imasayi Chieftaincy Declaration of 1957, it was their turn to produce ‘Omo Oye’ and since then the journey has begun in the family.”

Having got this, Oba Kuoye disclosed, “Yewa North Local Government notified the family on 4th March, 2021 for the commencement of the processes and that Oyesokun Ruling House should organise their family meeting within eleven (11) days and the LG Council be notified accordingly, so that their officials would be on the ground to observe the process.

“Other processes followed and conducted successfully with the official supports of the security operatives operating in the Local Government Area. Since my emergence as the Olu Imasayi Elect and Certificate of Appointment issued to me, I have been thinking of how to bring everyone onboard to achieving the Imasayi of our dream where all neighbouring towns will be emulating.

“To let my brothers that slugged the title out with me (Prince Opeoluwa Olude and Mr Rahman Ajayi) know that we are one, I put calls across to them to let know that we are one and should put the development and the interest of our town and people at heart, and forget about what might have transpired during the royal journey. The response of my brother, Prince Opeoluwa Olude was very complimentary while Rahman Ajayi refused to pick my calls, until I sent a text message to him and he replied thus, “you can only be king in Imasayi if the process that produced you is not fraudulent” I thank God and the Alales for their support since the beginning of the process till date.

“My personality, family, friends and supporters have been maligned, but I did everything humanly possible to absorb the missiles. I have accepted it as some of the prices of leadership, even when my family and friends felt like taking some legal steps, but I advised them to let go. Today, here we are now, my belief since the beginning of the journey was that, if this throne will not tarnish my family name, my ruling House and the future of my children, it should be a smooth transition. I thank God for His faithfulness to us.

“As an administrator, Social Worker, Rotarian, Unionist – Chairman, Association of Senior Civil Servants of Nigeria, ASCSN, NIMC Unit, Ogun State and Patron of some Community Development Associations, is an attestation that God deliberately chose me to come and serve this town and use my wealth of experience for the growth of our land.

“Finally, I don’t want to be an ingrate, so the following Imasayi indigenes needs to be mentioned and commended for their relentless efforts towards the success of this installation. They include Engr. Temitope Kuyebi who stood on the path of truth till date; I appreciate you sir.

“Others are Major Rasheed, Chief Toye Moses, Bobatolu of Imasayi, and all Imasayis at home and in the Diaspora, and our kinsmen in the Nigeria Police Force, my Media Team, Imasayi Traditional Council, especially High Chief Aina Rotimi Kusoro, Baales and youths, ably led by Comrade Ewulo Bolarinwa, who is now the Akinrogun of Imasayi Kingdom.”

Oba Olalekan however called on the people of Imasai to accord him their unflinching support toward a peaceful reign in the town while assuring his people of better days ahead.

“Distinguished Imasayi indigenes and residents, the era of shenanigans has come and gone, an Oba is now in place, I appeal to everyone of us in the interest of peace and community stability to steer clear of any act that can put the name of our town into disrepute. I believe we all should be partakers in the development of the ancient town. Fellow omu ajagidiagbos and residents, àáyá bé sílé, ó bé sí ísé ni o”, Oba Olalekan posited.

“Finally, another brand new life begins in Imasayi land from today and our villages should also know that the administrative baton of Imasayi has changed and we must all stand to defend our people at all times and should not see the position as just a position but as a call to service, and I am ready to reward hardworking Baales & Chiefs.”

Oba Kuoye disclosed that his reign will be all inclusive, hence elites of Imasayi will also be invited to serve on committees that will be assisting Olu of of Imasai in discharging some of his functions, adding, “Olu can’t be everywhere, but they should see this as a call to service and they should also discharge any role given to them to the best of their ability, according to the Rotary caution that, “….it pays who serves BEST.”