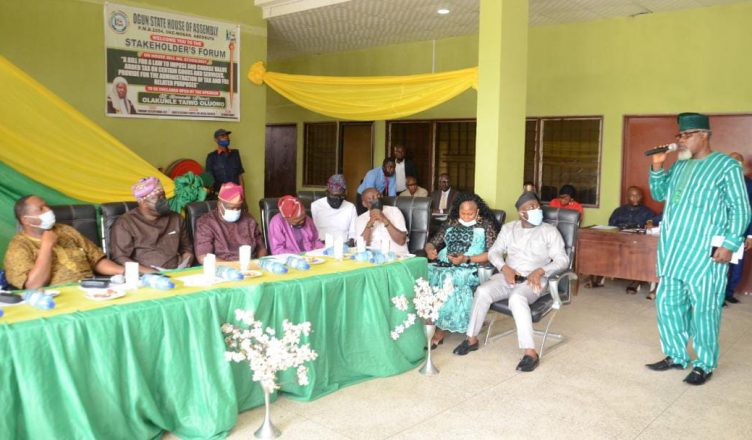 Ogun State House of Assembly said the proposed State Value Added Tax Law, 2021 remiains one of the initiatives of  the Assembly being a progressive legislative institution poised towards achieving feasible fiscal restructuring in the country to further ensure equity and fairness in revenue sharing among the Federating units.
The Speaker, Rt. Hon. Olakunle Oluomo, disclosed this while declaring open a stakeholders’ forum on “H.B. 073/OG/2021- A Bill For A Law To Impose And Charge Value Added Tax On Certain Goods And Services, Provide For The Administration of The Tax And For Related Purposes” held at the Assembly Complex, Oke-Mosan, Abeokuta.
Oluomo clarified that the proposed bill would ensure improved revenue to the State, as the revenue item was not listed in the exclusive list of nation’s constitution, hence the State had the right to collect Value Added Tax, the more reason the lawmakers as the true representatives of the people introduced the bill.
The Speaker noted that the South West Conference of Speakers was already putting in place more feasible modalities to enhance the collective development of the Southwestern States, with a view to further promoting effective service delivery and charting the path towards true fiscal federalism.
Assuring stakeholders of speedy passage of the bill, the Speaker noted that it had become imperative to improve the internally generated revenue of the State to aid the implementation of more socio- economic development in all parts of the State.
He noted that the State deserved far better than what it received from VAT through the Federation account, just as he equally canvassed for higher percentage in the sharing formula of revenue acruable from VAT to the Local Government Councils to aid grassroot development.
On their parts, stakeholders including the representatives of the State Chapters of Association of Nigerian Authors and the Guild of Public Affairs Analysts, Dr. Paul Oni, Committee for the Defence of Human Rights (CDHR), Yinka Folarin, Director of Industrial Promotion in the Ministry of Industry, Trade and Investments, Engr. Kehinde Akintomide and a former member of the Assembly, Hon. Habeeb Ajayi amongst others lauded the Assembly for the introduction of the bill.
They added that it was a clear indication that the institution remained sensitive, considerate and responsive to the yearnings of the people.
Calling for a review of the collectibles under VAT, the sharing percentage between the State and Local Government Councils, they sought for flexibility in VAT collection to encourage compliance andsustainability, especially as it affected the small and medium scale businesses in the implementation of the law upon its passage by the Assembly and assent by the Governor.
Also, the Chairman, Board of Internal Revenue Service, Gbenga Olaleye, who called for amendment of the bill to include taxation of e-commerce and allied businesses in view of the introduction of digital technology to commerce, proposed a sharing percentage of 70% to the state and remaining 30% to local government councils.