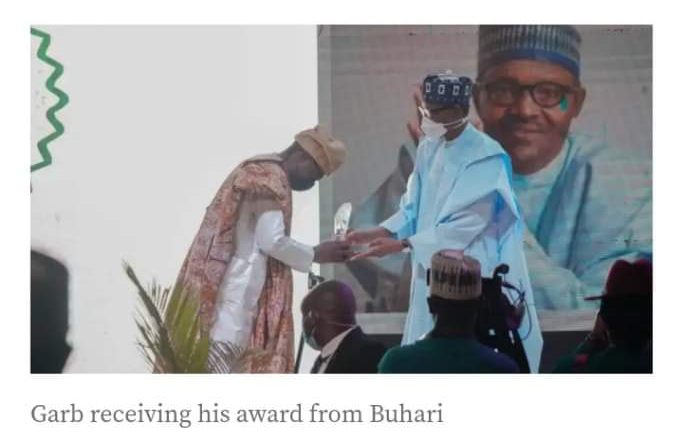 In celebration of Nigeria’s 61st Independence,President Muhammadu Buhari has honoured Pastor Kunle Garb,a native of a border town in Ogun state, who was prosecuted by Benin Republic government for defending Nigeria’s sovereignty.

The event held at the Banquet Hall of the Presidential Villa on September 30, and that also saw a total of 60 Nigerians receive special recognition awards, Garb was presented with a Special Award for Patriotism and Bravery.

Pastor Garb was nomited earlier along side 405 nationwide. However, after several screening stages, 60 significant Nigerians were eventually selected as winners.

The 60 lucky winners were selected Nigerians who had excelled in the areas of Arts, Business, Community, Education, Healthcare, Industry, Entertainment and Sports.

Infolitenews had earlier reported that Pastor Garb was arrested by Beninese Gendarmes after single-handedly resisting acts of encroachment into Nigeria’s territory by Benin Republic, through Igbokofi, a border town in Yewa North Local Government of Ogun state.

While awaiting trial in a Beninese Jail, Garb studied a book on the country’s judicial system and chose to represent himself in court, despite offers of assistance by the Ogun State Government and the Nigerian Embassy in Benin.

Pastor Garb won the case and regained his freedom on July 1.

His act of valour and patrotism eventually made authorities like the National Boundary Commission and the office of the Surveyor General of Nigeria to review the activities of Benin Republic in Igbokofi, a commercial community and border town in Yewa North on Ogun State.