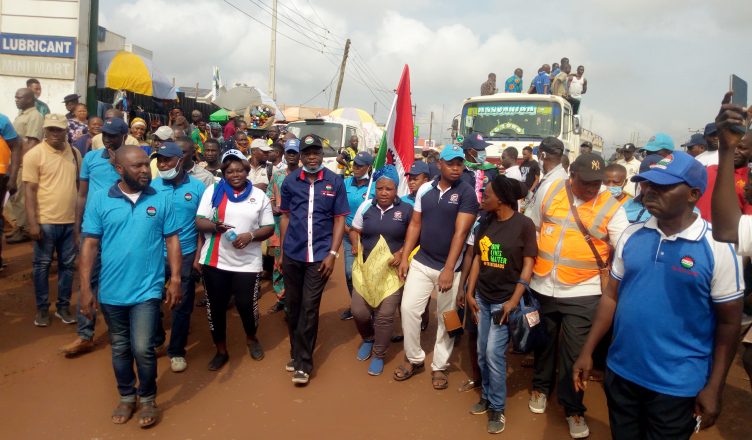 The popular Sango Ota Idiroko road of OGUN State was partially shot down this morning as the Nigeria Labour Congress protested the ugly state of the road.

The protesters accused the Minister for Works and Housing,Babatunde Raji Fashola a liar and deception,who promised to start work immediately when he visited the bad portion of the road months ago.

Chairman of Ogun State NLC,Comrade Emmanuel Bankole who led the protest after the 21 days ultimatum given to the Federal Government to fix the road and bring the pains of road users to an end.

The protesters carried various placards like,”We need Good Road in Sango”,”Enough of Bad Governance”,We Need Repairs on Our Roads not Palliative”,and so on.

The state government had earlier sent palliative of granite stones to some portion of the bad road, to reduce the pains of motorist, but the people demand reconstruction of the badly damage road, and opening of dranage for the passage of water.

The people also lamented the neglect of major roads in Sango Ota and Idiroko axis which has brought untold hardship to the people in time past.

Mr Sule,a motorcycle operator said that bad road has made many of his colleagues to abandon doing business on that exis.”The bad road has affected our business, especially at this period of raining season.Most of my friends in the business have gone to Lagos or start another business, because they spend so much on their motorcycles.”

Speaking with a representative of Federal Road Mentainance Agency,at the Federal Secretariat Okemosan Abeokuta, Engineer Adeosun said the agency have moved to the road and work has started.

He added that the palliative work was to ease vehicular movement and change the ugly state of the road, promised that the government will do the needful.