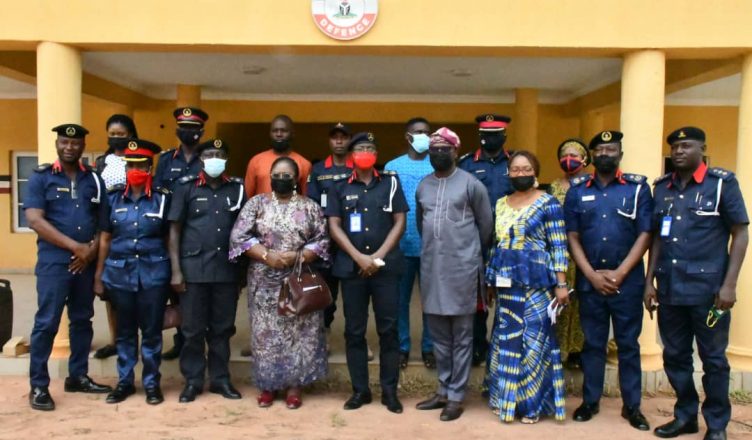 The Nigeria Security and Civil Defence Corps (NSCDC) Ogun State Command has assured the Ogun State Independent Electoral Commission (OGSIEC) of adequate support before, during and after the forth coming Local Government elections in the State.

Commandant of the Corps, Hameed Abodurin, who gave the assurance during a courtesy visit by OGSIEC, led by its Chairman, Mr. Babatunde Osibodu to the Command’s headquarters in Abeokuta, promised to ensure the security of voters, as well as OGSIEC personnel during the exercise.
He saluted the courage of Osibodu and the entire OGSIEC’S Team for accepting the enormous task, which he noted underscores why the Corps will leave no stone unturned in order to ensure free, fair and credible elections in the State.
“I salute your courage for accepting to be the chairman of an election body, and I want to assure you that we will not rest on our oars in order to contribute to the peaceful conduct of the local government elections in Ogun State.
Commandant Hameed called on Nigerians and the electorates to continue to be law-abiding, be security conscious at this period, assuring that the Command will further engage the Commission on security tips while engaging on series of training of its personnel on election process.
Speaking earlier, the OGSIEC boss disclosed that, as the Local Council polls draw nearer, there was the need to engage security agents to achieve violence- free election, reiterating the Commission’s resolve to conducting free, fair and credible council polls that will be a benchmark in the history of Local Government elections in Nigeria.
“The NSCDC is no doubt a result- oriented Commission, we cannot speak of law enforcement agency in Nigeria without mentioning you and I believe with your support, we will have peaceful Local Government elections”, Osibodu added.
Also speaking, a Commissioner in the Commission, Mrs. Gbemi Onasanya while appreciating the NSCDC for the warm reception accorded OGSIEC, stressed that security was key to achieving set goals and objectives, describing the Corps as partner in progress to deliver credible elections.