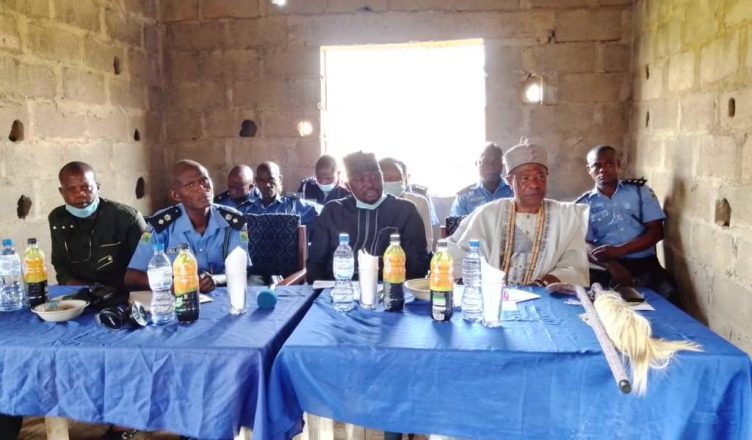 The Chairman, Obafemi Owode local government, Ambassador Ogunsola Adesina on Thursday called on all stakeholders in the local government to take security of lives and property as a joint effort, saying that security remains everybody’s business.

Ambassador Ogunsola stated this while speaking at a day security stakeholders meeting organised by Nigeria Police Owode Egba Divisional Police and Police Community Relation Council, (PCRC), Obafemi Owode local government on how to beef up security network within the local government and its environs

The Chairman maintained that security of lives and properties is everybody’s business.

Security agencies in Obafemi Owode require the support of the citizens to enable them diligently combat the myriad of security challenges”.

He lauded the security agencies for doing their best in the face of the acute paucity of manpower and logistics.
The Local government Boss, who is also a Special Adviser to to the State PCRC said that the royal fathers and village heads in the Council area were forging sustainable synergies with the security agencies .

“They are routinely passing credible intelligence information which is also being sent to the appropriate authorities .

“The right actions are always taken and most crimes are nipped in the bud.

“I am assuring that this level of support would be sustained, as without peace and security the nation cannot develop,” Ogunsola averred.

Earlier, the Divisional Police Officer for the Owode Egba Divisional Police,CSP Olusola Oniyiku called for collaboration with all stakeholders in ensuring law and order in the Local government area.

He urged the people of the local government to continue giving useful information to the police, to sustain the fight against crimes and criminality..

He commended the efforts of the Chairman Obafemi Owode local government ,all royal fathers and stakeholders for the relative peace being enjoyed,saying, “the council is the most peaceful in the state.”