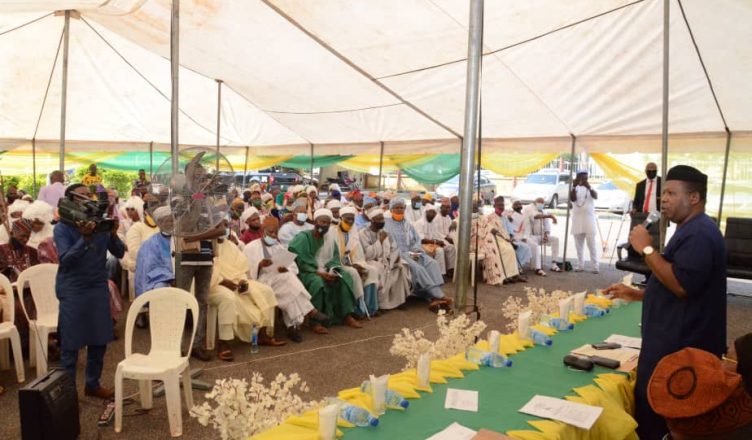 The Paramount Ruler of Iwoland, HRM Oba Abdulrosheed Adewale Akanbi, has thrown his weight behind the Ogun State House of Assembly ‘s legislation on Obaship installation and burial processes in Yorubaland.

Oluwo equally commended the sponsors of the bill led by the first class monarchs in the Gateway State, the Awujale of Ijebuland,Oba Sikiru Adetona, Alake of Egbaland, HRM Oba Adedotun Aremu Gbadebo III, AKarigbo of Remoland,HRM Oba Adeniyi Sonariwo,Olu of Yewaland, HRM Oba Kehinde Olugbenle, for taking the bull by the horns as a pilot project for monarchical installation and burial in Yorubaland.

Oba Akanbi described the bill as a step forward to attract generations to Yoruba culture. He revealed the bill will strengthen and further empower traditional rulers to be independent of secret cult dictatorial tendency and control.

He lauded the monarchs for entrenching pure monarchy devoid of idolatry, imploring other states to propagate similar bill aimed at protecting certain rights of the kingship.

The changes sought in the bill are with regards to the installation and burial of Obas in the state. The Bill is titled: HB NO. 36/ OG/2020 – A Bill for a law to provide for the Preservation, Protection and Exercise by the traditional rulers of their fundamental Rights to be in­stalled and buried according to their Religions and Beliefs and for other matters.

Its abbreviated form is: Ogun State Traditional Rulers (Installation and Burial Rites) Bill 2020. According to reports, the Bill is unanimously supported by members of the House of Assembly, and is backed by the Speaker, Hon. Olakunle Oluomo.

Oluwo expressed worry over the despotism tendency of secret and confraternity societies to pocket UnGodly monarchs in the name of rituals and rites, saying the bill is a relief for true kinship.

He called on other Houses of Assembly to emulate the template and rescue traditional institution from going into extinction. Such practices to be eradicated in the bill include killing of human for rituals and traditional.

A statement by Oluwo through his press secretary, Alli Ibraheem, reads “Yoruba monarchy was an envy of traditional institution with autonomy authority. The infiltration of traditional worshippers has placed monarchs under certain authority. Hence, decimated the influence of kings as subordinate to secret societies and confraternity groups”

” I commend the sponsors of Obaship Bill titled “HB NO. 36/OG/2020″ for efforts at preserving, protecting and safeguarding the authority of traditional institution through the Ogun State House of Assembly. Foremost among the promoters of the bill are Awujale of Ijebuland, Alake of Egbaland, AKarigbo of Remoland and the Olu of Yewaland. I urged the Ogun State House of Assembly members to sustain our tradition by passing the bill into law to attract generations to kingship. Killing of human for traditional rites is anti yoruba culture, tradition and kingship”

“I’m disappointed to see certain people protesting against a bill to liberate monarchs from unfounded confinement. Evil persists when people promote it”

“Change has come. Is either you move with change or stay back. The bill is an empowerment for Yoruba traditional institution. Any opposing view to he bill is an anti- true monarchy”