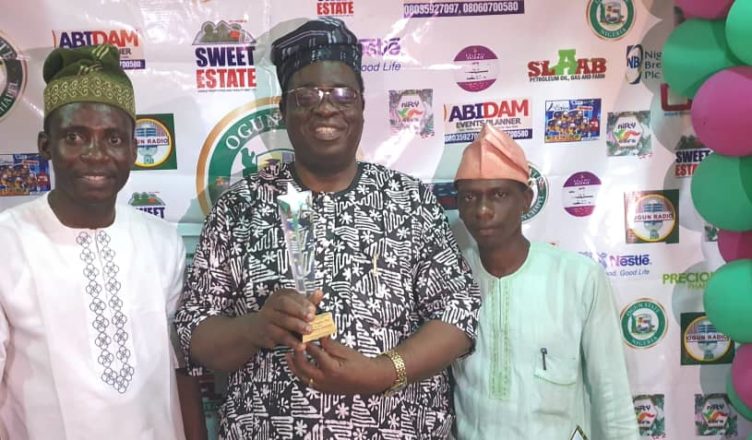 Commissioner for Agriculture, Dr. Adeola Odedina has bagged the “Commissioner of the year” award of the Nigeria Union of Journalists ( NUJ), Information Chapel for the various strides of his Ministry.

Odedina was given the award at the Chapel’s Award and Dinner night to climax its Press Week at the OK Event Centre, GRA, Ibara, Abeokuta.

Presenting the award to the Commissioner, Chief of Staff to the Governor, Alhaji Shuab Salisu, disclosed that he was not surprised at the choice of Odedina for the honour as there are visible milestone in the Ministry of Agriculture for all to see.

“I am highly delighted to present this award to you having seen the visible milestone in the Ministry of Agriculture, no doubt you have surmounted many obstacles to attain this feat, I urge you to continue the good work even as we extend the dividends of democracy to the nooks and crannies of our dear State”, he said.

The Chief of staff thanked the Governor for spearheading laudable Agricultural programmes that has distinguished the state, calling for more support from stakeholders in the “building our future together mantra”.

He appreciated Information Officers for tireless efforts at projecting the activities of the Prince Dapo Abiodun -led administration, charging them to sustain the momentum.

In his acceptance speech, Dr. Odedina appreciated the governor, Prince Dapo Abiodun, the Executive Council Members as well as the Agric Team 2020 of his ministry, saying all the Ministry achieved was due to their unalloyed support and cooperation.

While appreciating the NUJ, Information Chapel for the award, Odedina promised to continue the good work saying, the award will definitely spur him to do more.

Speaking earlier, Chairman, NUJ Information Chapel, Comrade Wale Olanrewaju, said the choice of Odedina for the award cannot be contested, urging his members to redouble effort at projecting the programmes and activities of the present administration.