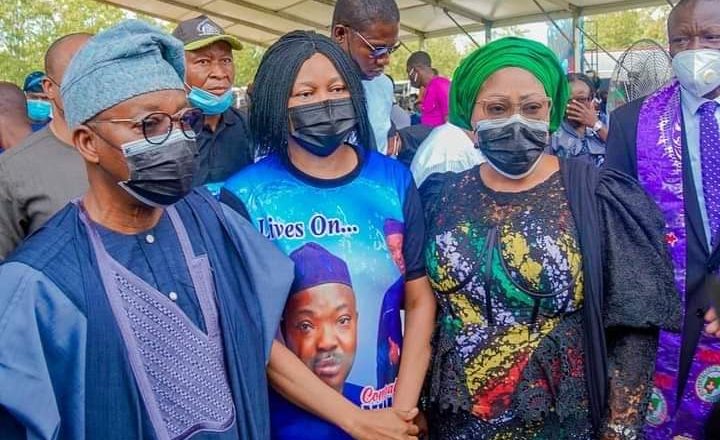 The Governor of Osun, Adegboyega Oyetola, has said that with the passing of Yinka Odumakin, Nigeria and Osun, has lost a fearless fighter and a crusader of a new Nigeria.

The governor said this while extolling the virtues of the late Odumakin whose remains were laid to rest on Saturday in Moro, his country home.

Oyetola noted that the deceased left behind a legacy of inspirational service, fierce loyalty to the Yoruba race and relentless contributions to the quest for a greater nation.

Addressing the people at the funeral service organised in honour of the deceased, Governor Oyetola said Odumakin’s trajectory through life, whether as an impressionable undergraduate activist in Ife, a purposeful columnist, a fiery anti-dictatorship combatant, a vociferous Afenifere scribe, or his political involvement, reads like a profile in courage.

Oyetola further stated: “He did not live a wasted life. He was an illustrious son of Osun and a man of deep conviction who constantly fought for what is right, just, and equitable.

“He simply lived for the people. He was a phenomenal leader, who, without holding public office, impacted us in unique ways.

“However, we must not sorrow like those who do not have hope. We must find comfort in the truly phenomenal life he lived. We should rejoice, knowing Odunmakin has left for a better place.

“He has left for us on this side of humanity a legacy of inspirational service, fierce loyalty to the Yoruba race and relentless contributions to the quest for a greater nation.

“We are indeed grateful for his life. It is our fervent prayer that the good Lord grant his dearly-beloved family and all of us the fortitude to bear this irreplaceable loss. May his soul rest in perfect peace.”

Speaking, Ekiti State Governor, Dr. Kayode Fayemi, lauded the uncommon virtues of the deceased, and described him as an un-apologetic leader to Yoruba nation’s agenda.

“Odumakin was unapologetic to Yoruba nation’s agenda and he was not a secessionist. He always cleared the path to progress, he made great impact towards the progress and development of our country. Yinka’s departure has given a great legacy, the legacy of speaking truth and legacy of unrelenting campaign for the restructuring of our country.

“As we all know, this country needs rescue from the evil merchants who want to drag it down. That is what our brother, the late Odumakin stood for all his life right from his days at the University of Ifes now Obafemi Awolowo University.

“On behalf of our Chairman, Southwest Governors Arakunrin Oluwarotimi Akeredolu, who would have loved to be here, and the entire Governors, I affirm that we will continue to pursue the courage of conviction, the determination not to give up, the pursuit of restructuring and all that Yinka stood for until we have a new Nigeria,” Fayemi added.

Also, Oyo State Governor, Mr. Seyi Makinde, eulogised the courageous life lived by the deceased which according to him had paved the way for the emancipation of truthfulness, equity and justice in the human race.

Makinde said, “A life lived with integrity, commitment to one’s ideals, even if such life is without fortune or fame, it will be a shinning star to light the path of others that are coming behind, and that is what the deceased–Yinka Odumakin — did for this generation.

“The ideals he lived for, the ideal to a new course, the struggle will forever be the shinning star to light the path for us until will get the type of country that we deserve, and that himself and other comrades laboured for. He had done his own work for the rest of us to continue from it.”

Also, leader, Afenifere Yoruba group, Pa Ayo Adebanjo, described Odumakin as a true and uncompromised Awoist who lived all his life to advocate for a better Nigeria, a nation that works for all and sundry.

“As a politician, as an activist and public analyst, Yinka was a born-democrat. He must be praised, for the work he had done for Yorubaland, Nigeria and the progressive world cannot be quantified,” Adebanjo added.

Earlier in his remarks, the Ooni of Ife, Oba Enitan Adeyeye Ogunwusi, said even in death, the late Odumakin would remain an unforgettable nationalist.

“To us from your birth place, your ancestral, we will rather celebrate an icon that was graciously given to us by Olodumare (God). You are dead because you will forever live in our hearts. You were not only a son of Oduduwa land, you lived Oduduwa and you breathed Oduduwa,” Ooni said.

In her remarks, the wife of the deceased, Dr. Joe Odumakin, thanked the people, particularly Governor Oyetola for the uncommon support.