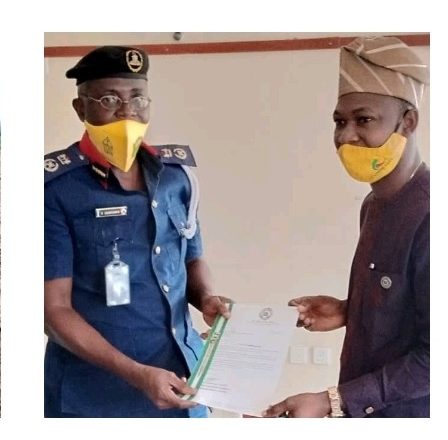 Hon Abiodun was received by the state commandant,Comm Abodunrin and other top officials of the Command.

The lawmaker appreciated the security agent for their support at his constituency especially during the lockdown period.

He said the role played by NSCDC men in bringing peace to the constituency that was rampaged by criminal element who have taken over the communities is commendable.

The commandant took him round the new facilities of the headquarters to familiarize with the structure and see the level of work done.He also used the opportunity to call his attention to the fact that the legislative needs to make a law that will make community service a mandatory programme for students of tertiary institution.He said this will enable the society to see safety and security as a responsibility of everybody.

Hon Abiodun promised that the present government will support the agency to achieve the goal of a peaceful society.

He said,”I trust and believes that the executive Governor,Prince Dapo Abiodun Mfr. is a listening and supportive father. His Excellency will make provision for the logistics as requested by the state commandant because he frown at any act of criminality in the state.”

He also added that part of the effort of the state government is the Security Trust Fund,which takes care of major security challenges in the state.

Comm Abodurin also pointed at the need for funding and logistics for Agro Rangers who have undergone intensive training on detecting criminal hideout in and around our forest and to ensure that there is no hideout for criminals. He said when the team of Agro Rangers are fully deployed they will comb the forest and bushes within the state.

The legislature said that with the wealth of experience of Comm Abodunrin, the Command will always give a sterling performance in ensuring a safer Ogun State