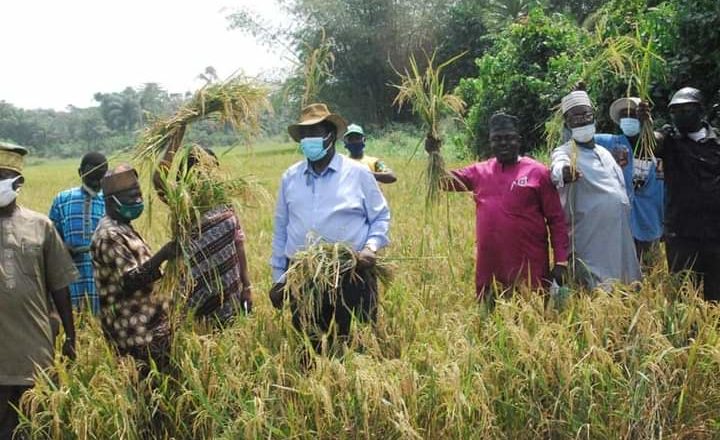 Recall that the state government and NCAM, established the technology- driven intensive Rice production and Mechanisation demonstration farm, in November last year, with the aim of training small holder farmers and youths, to grow rice all year round, taking advantages of natural resources like swamps and streams.

Performing the Flagg off at Sawonjo, Yewa North Local Government, the Governor, Prince Dapo Abiodun maintained that the exercise was afurther demonstration of his administration’s resolve to walk its talk in promoting Rice Value Chain in the state.

Represented by the Commissioner for Agriculture, Dr Adeola Odedina, Abiodun assured that his administration would continue to accord high premium to agriculture leading to food security, reiterating that in 2020, the state government facilitated linkage for 3,721 Rice Farmers to funding opportunities, inputs, among others.

“We affirm our resolve to fund climate smart Agriculture to enable our farmers integrate technology with the abundant natural resources, to grow crops all year round- to defeat negative effects of climate change and hunger, while providing jobs and ensuring that our host industries run well, and thus keying into the Diversification Agenda of the Federal Government, which is also a global direction in managing the changing dynamism of Governance and Economic Integration”, he said.

Governor Abiodun also disclosed the State’s readiness to partner other states on the expansion of Value-Chain opportunities for farmers and other agricultural stakeholders.

“The year 2021 will witness expanded opportunities in the Anchor Borrowers Programme in Rice and other commodities. The State is also finalizing partnership opportunities with Kebbi and Lagos States, on the expansion of Rice business opportunities for the benefit of farmers and other Rice value chain actors”, the Governor disclosed.

Also speaking, the National Coordinator, NCAM, who trained the farmers, Engr. Yinka Ademiluyi said, the State Government’s support accorded NCAM suppases that of other Geo-political Zones in Nigeria, expressing optimism that the farmers would realise maximum yields and profits based on SAWAH technology they have been exposed to.

Ademuluyi enlightened that SAWAH Eco-Technology was a Japanese model for rice Farming which increases yield optimally through bunding and the use of inlet and outlet connecting irrigation and drainage, adding that, it enhances effective water control and management, improve the efficiency of fertilizer among others.

The Chairman Yewa-North Local Government, Mr Bankole Babatunde David eulogized the State Government for siting the demonstration farm in his domain, describing the state Governor as a man of his words.

He expressed delight that the state has arable land in spite of drought where food could be produced all the year round, calling on farmers and youths to concentrate on the scheme to be productively engaged at every season of the year, just as he promised availability of more land for expansion of the Programme.

Speaking on behalf of the participants, Patricia Martins and Akintola Jacob, said using the technology, they know how to plant better in every season of the year and make huge profit, thanking NCAM and the state government for the opportunity.