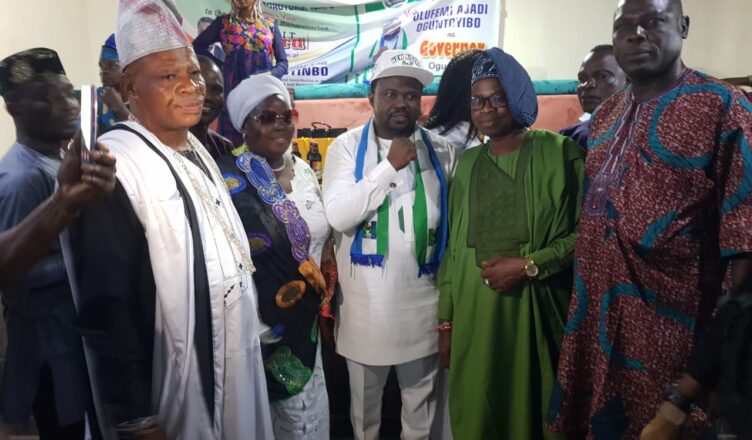 Speaking at the event, an elder statesman in the community, High-Chief, Aina Adeosun, said members of the Community Development Association, CDA, and other stakeholders in Torotoro and its territory had agreed to vote for Ajadi at the 2023 general election, as they felt it is time for Ibafo son to be in the state house.

He said,”though Ajadi is one of us in this Torotoro, his philanthropic deeds are felt in almost all communities in Ibafo and I believe he will do better than expected if he wins the governorship election.”

The CDA chairman of Torotoro Unity 2, Ibitoye Marcus, said the endorsement of Ajadi’s candidacy was a unanimous decision by all the stakeholders in the community.

The gubernatorial candidate, Comrade Olufemi Ajadi Oguntoyinbo said  what Nigerians went through after the annulment of Chief Moshood Abiola’s 1993 victory in the presidential election had made him pray to God to make him a source of liberation for Nigerians from economic hardship.

He added that the miserable occurrence Nigerians had during the military era was experienced by Nigerians in the present democratic time, especially during the clamouring for END SARS by Nigerians.

Comrade Oguntoyinbo emphasized that,”The APC and the PDP governors kept the palliatives from the citizens which shows they have no sympathy for the electorates.”

The NNPP Southwest Secretary, Tunde Oke, who is also the Director General of Ajadi’s campaign committee, promised the people at the gathering that Ajadi would run an inclusive government if elected in 2023.

Oke expressed happiness about the massive turnout of the people from various communities in Ibafo, adding that the positive response had shown victory ahead of the 2023 election.

He said,”The insecurity; power failure; bad roads and unemployment are the first targets to be tackled before dealing with other irregularities one after the other.”

Oke urged them to play their parts by propagating the awareness of the party, NNPP, and vote massively for all the party’s candidates in the forthcoming elections.

Speaking along the same line, the state Public Relation Officer of the party, Prince Kehinde Olowu, said the incumbent governor, Dapo Abiodun, had failed to fulfil promises his party made to the citizens of Ogun State, adding that Oguntoyinbo would fulfil his promises in line with his known character, “Promise-and-do”.

He said the NNPP gubernatorial hopeful had a tradition of humanitarianism, and would not fail the Ogun people.

The Southwest Publicity Secretary of the party, Kilamuwaye Badmus, said the PDP had failed the people of Ogun State before the APC took over, emphasising that it would be through the victory of NNPP that the electorates could overcome the present challenges from the incumbent APC government.

He added that if the electorates wanted the positive change to reflect in Ogun State, they should not hesitate to embrace the candidature of Olufemi Ajadi.

Badmus pleaded with the people at the event and other electorates in Ibafo to help the course of its future by voting massively for NNPP candidates in the 2023 general election.

The event was spiced with music by the young rising musical artist Olajide Temitope, popularly known as Tope Indomie.