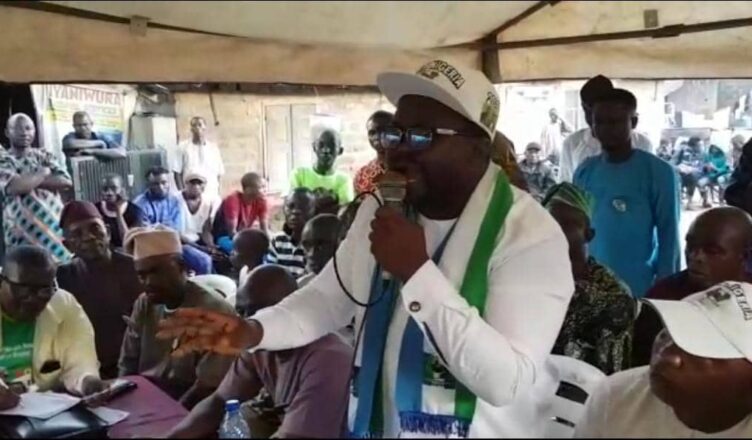 The people of Abeokuta South trooped out  massively yesterday to welcome the New Nigeria People’s Party (NNPP) Guber Candidate, Comrade Olufemi Ajadi Oguntoyinbo in a festival manner in preparation towards the 2023 general election.

Party members, loyalists, community leaders were on ground to receive the gubernatorial candidate in Abeokuta the state capital.

It was Comrade Oguntoyinbo second day of his tour of the local governments that made up the state.

The party State chairman, Comrade Sunday Olaposi Oginni, who led the entourage of the gubernatorial candidate, acknowledged the hospitality and warm reception of the Abeokuta South people saying it had shown the acceptability of NNPP and rejection of the ruling party, All Progressives Congress (APC) and the People’s Democratic Party (PDP).

He reminded the people of the state what he had said earlier in the year, that NNPP in Ogun State would be the party to send away the incumbent government, from the State house through constructive electioneering processes.

Oginni emphasized that both the APC, and PDP have been rejected by the electorates ,having been tested and found guilty of the mismanagement of the state resources.

At the last election , he recalled that APC was actually defeated in most of the wards by the NNPP and others, yet the party was announced winner in the elections.

He said, “I am using this opportunity to thank the Abeokuta South local government party chairman; other executives; the ward chairmen and all the ward executive members. I also urge all the executives to work hard for Ajadi’s victory, because through this members and other electorates can realise the social inclusiveness which the party has promised”.

The gubernatorial candidate, Comrade Olufemi Ajadi Oguntoyinbo while speaking reminded the good people of the state how sitting government kept away relief materials for COVID 19, which was supposed to help the people during the lockdown.

Comrade Oguntoyinbo promised to tackle the problems of senior citizens and pensioners in the state, by ensuring that they were paid their entitlements once he gets to power.

On issue of minimum wage, he said it is already a priority in his manifesto and that he would work to overhaul the salary and conditions of service of public and c