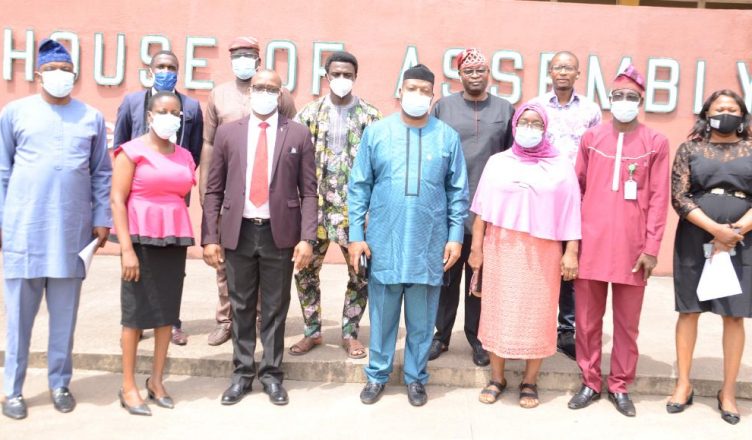 The Speaker of the Ogun State House of Assembly, Rt. Hon. Olakunle Oluomo has lauded the Federal Government for its ingenuity in ensuring the extension of service of the Neuropsychiatric Hospital, Aro, Abeokuta to cover other extensive health care and general health care services for the people aside from mental health care.
Oluomo gave the commendation, while playing host to Management staff of the hospital led by its Provost and Medical Director, Dr. Paul Agboola, who was on an advocacy visit to the lawmakers at the Assembly Complex, Oke-Mosan, Abeokuta.
The Speaker noted that the general medical practice currently being rendered by the Federal Government’s health facility would complement the services of state-owned health institutions by giving more opportunities to the people of the State to have unfettered access to quality health care services, thereby reducing transmission of infectious diseases, death and maternal mortality amongst others.
Urging the residents to make use of the health facility, Oluomo in company of other lawmakers, acknowledged that the hospital had availed indigenes of the State opportunity to exhibit their talents in the medical practice excellently, with an assurance that the Assembly would engage the State Ministry of Works and Infrastructure in fixing the failing portion of the Ita-Oshin road to aid human and vehicular movements within the axis.
Speaking, a member representing Abeokuta South 2 State Constituency, Hon. Adeyemi Ademuyiwa, admonished the management of the hospital to further improve on its maintenance culture to enable it maintain its national and global rankings.
Earlier in his presentations, Dr. Agboola said the hospital which had gotten financial grants from the Federal Government would further witness more infrastructural development as it had embarked upon the procurement of more state of the art medical equipment alongside a ten-bed intensive care unit which was almost 80% completion.
Lauding the various infrastructural projects embarked on by the present administration, the Provost noted that the hospital had gotten an operational boost which included a molecular lab and infectious diseases management centre which was under construction, to complement the State owned health facilities for the effective management of COVID-19 pandemic and any other infectious diseases.
In a related development, the Speaker equally received in audience members of the Association of Radio and Television Regular Callers of Nigeria, led by their Chairman, Mr. Sule Obadina with a charge to them to always ensure that constructive criticism of government remain the catalyst driving their policies and programmes.
To this end, the Speaker urged the members of the association to always be objective and development-oriented in their submissions and contributions to issues, while appraising government policies with a view to ensuring an all-inclusive system of democracy for the benefit of all.
Earlier, the Chairman of the Association, Mr. Obadina explained that the association which consisted of retirees, artisans, as well as business men and women was formed in the 2018 with the mission of sensitizing members of the public on government activities, while bringing forward issues that required government’s  urgent actions.