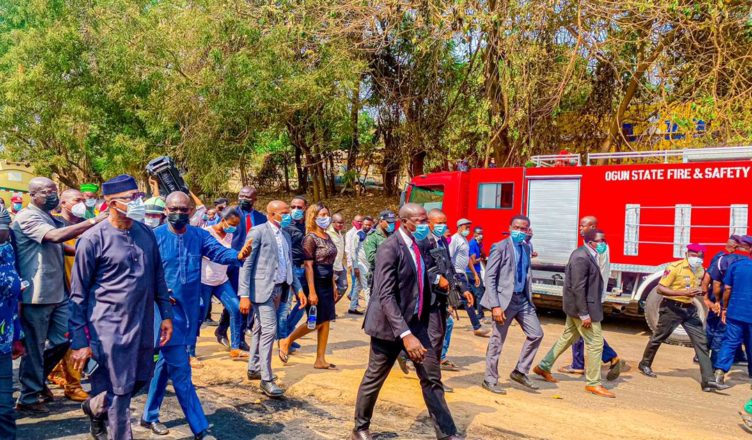 The Ogun State Government has barred drivers of tankers and other articulated vehicles from use overhead bridges in the State, as it announced that it will put in place strict penalties for any of such vehicles.

The Governor, Prince Dapo Abiodun who made this known during an on-the-spot assessment of the fire incident that occurred in Kuto, Abeokuta, when a tanker loaded with Premium Motor Spirit lost control as a result of brake failure, leaving three people dead, six injured and seven vehicles burnt.

According to the Governor, ‘’we will put in place very strict penalties for any tanker driver caught on any of these bridges. This is one of the measures that the Ministry of Transportation will be rolling out in the next few days.”

He described the accident as an unfortunate event, saying that three of the six injured have been admitted at the State Hospital, Ijaye and Federal Medical Centre, Idi-Aba respectively, just as Government has invited burn specialists from Lagos to attend to those with severe burns.

Prince Abiodun regretted that a bridge constructed to solve one problem has ended up creating another, adding that the State Government would carry out a comprehensive role in tackling the menace.

While commiserating with families of those who lost loved ones, Governor Abiodun pledged that his Administration would ensure that those who sustained injuried are taken care off and those whose properties were affected are assisted to ameliorate their losses.

The Governor also visited the injured at the State Hospital, Ijaye and the Federal Medical Centre.

The accident claimed three lives, injured six, with seven vehicles including the tanker and motorcycles which were burnt by the raging fire.