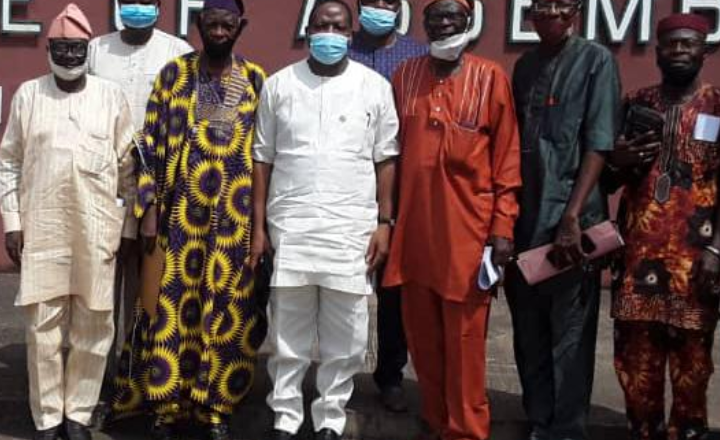 The Speaker of the Ogun State House of Assembly Rt. Hon. Olakunle Oluomo, has assured members of the State chapter of the Nigeria Union of Pensioners ( NUP) led by Comrade Waheed Oloyede, of the Assembly’s renewed
commitment to the welfare of the elderly and the physically challenged as it is putting together a bill that will create new departments meant to address issues relating to their welfare.

The Speaker also promised the members of the State chapter of the Nigeria Institute of Quantity Surveyors led by Mr. Gbolahan Popoola, that plans were underway by the Assembly for the holistic review of the Local Government law to promote efficiency and give rooms for stakeholders involvement in grassroot development.

Oluomo gave the assurances today ,while playing host to the members of the two groups during a courtesy call on the Speaker at the State House of Assembly Complex, Oke-Mosan, Abeokuta.

Oluomo, while responding to the presentation of the pensioners, assured that the Ninth Legislature would continue to engage the government towards ensuring the payment of their outstanding gratuities as soon as government receives the bond approved by the Assembly.

He seized the opportunity to clarify that in line with the Assembly’s parley with the Labour union in the State, the controversial labour bill had been suspended, while the old law remains operational.

He urged the members of the institute to allow the bill on Public Procurement run for sometime so as to determine which aspects would require amendments.

Earlier in his presentation, the members of the NUP led by Comrade Oloyede had commended the State Government for the prompt payment of their monthly pensions, and the Assembly for always providing the necessary supports, while seeking the Assembly’s intervention towards the commencement of the payment of gratuities of retired workers from the State Civil Service from 2014, alongside their Local Government Service counterparts from September, 2011 to date.

They equally demand for the refund of the unremitted contributory pension deductions, while requesting for conventional review of pension in line with the nation’s constitution as well as the immediate execution of judgement of the National Industrial Court on gratuity by basic rent and transport amongst others.

On its part the members of the institute of Quantity Surveyors led by Mr. Popoola had proposed the engagement of members in the Works Departments of the Local Government Councils, while canvassing for inclusion in the proposed Town Planning bill to promote quality in the project implementation.