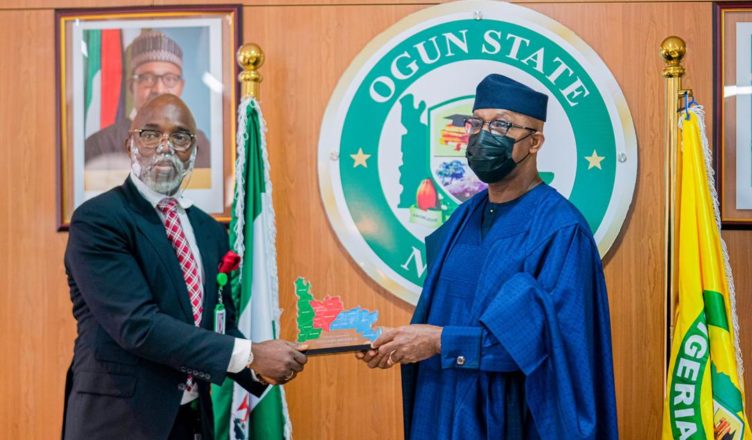 The Ogun State government have concluded plan to set up a Sports Trust Fund that would help in creating an enabling environment to tap from the multiplier effects of Sporting activities in the state.

The State Governor, Prince Dapo Abiodun stated this when officials of the Nigerian Football Federation (NFF), led by the President, Mr. Amaju Pinnik, paid him a courtesy call in his office at Oke-Mosan, Abeokuta, saying that sports, over time has moved from an entertainment past time to a Money spinning venture.

“We are putting in place, a Sports Trust Fund to create enabling environment to engage and enjoy the multiplier effects of Sporting activities. We are going to launch that very soon, so that our sports have enough funding”, he noted.

The Governor, who described Sports as a means of youth employment, opined that when youths are kept busy, the rate of crime, gangsterism, drug abuse and other social vices committed by some of them are reduced to the barest minimum.

Governor Abiodun said the state over the years has produced Sports stars, who have made the nation proud in many International sporting activities, adding that the state was ready to partner the nation’s football body to encourage football in the state.

He said his administration was in the verge of creating the state sports commission to be headed by a renowned sport entrepreneur, just as some State stadia like the one at Ijebu-Ode have been rehabilitated to encourage sporting activities.

Speaking earlier, NFF President, Amaju Pinnik, lauded the Governor on his achievements in the last one year, saying that he was in the state to prepare for the forthcoming General Assembly to be hosted by the state and the foundation laying of the sport house which would keep proper records of footballers in the country.

FT:Do you have a story for us?Do you want us to give you Media coverage for your programs and events?Call the editor on 08034638333!