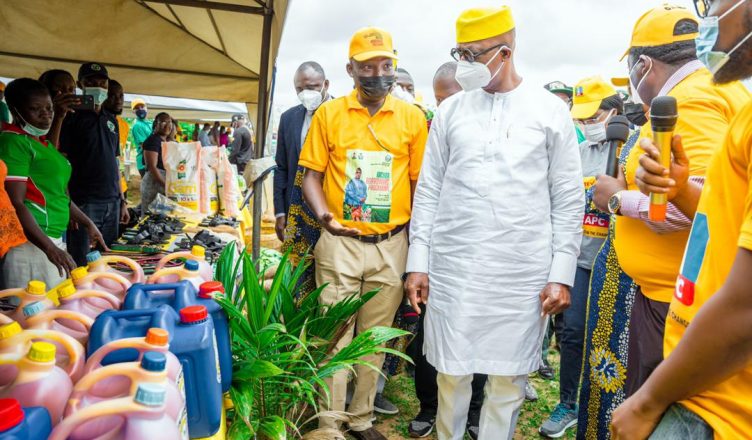 In its continued effort to cushioning the effect of COVID-19 in the Agricultural sector, the Ogun State Government through the Ministry of Agriculture has commenced year 2021 distribution of free cocoa seedlings to farmers, under the COVID-19 Planting Material Palliative to small holders’ farmers.

It will be recalled that 40,000 farmers across the State were given free cocoa and cashew seedlings, as well as cassava stems and maize seeds for planting in the year 2020.

Addressing beneficiaries during the commencement of the distribution at Idogo, Yewa-South Local Government Area of the State, Commissioner for Agriculture, Dr. Adeola Odedina, noted that the State Governor, Prince Dapo Abiodun is poised at reviving the State’s economy, through agriculture and return its cocoa production capacity to highest in the country.

Represented by the Director of Tree Crops and Rural Development Services in the Ministry, Mr. James Oyesola, Dr. Odedina said beneficiaries in different parts of the State would get 50 to 200 cocoa seedlings based on the capacity of their farmlands.

He added that in the present era of economic diversification, cocoa is gradually replacing crude oil and the State government is committed to helping farmers produce quality cocoa for local and international consumptions.

“This is a fulfilment of Prince Dapo Abiodun’s promise to farmers with the aim of improving their farm yields and in-turn boost their livelihoods. This distribution started last year with free distribution of cocoa and cashew seedlings, as well as cassava stems and maize seeds for plantation. It is a community-driven approach and that is why we are kick-starting it with cocoa distribution here at Idogo and due diligence will be followed for it to cut across”, the Commissioner assured.

Odedina enjoined the beneficiaries to be united and focused, especially in their various associations and ensure proper planting of the seedlings, stating that workers in the Ministry are available to guide them in the planting and production processes.

In his remarks, the Onidogo of Idogo, Oba Saidi Olubiyi, who described the gesture as unprecedented, applauded Governor Dapo Abiodun for his effort to boost the agricultural sector and pledged his subject’s support for the success of his administration.

Speaking on behalf of other beneficiaries, Mrs. Yemisi Adebayo assured that the planting materials given to them would be used judiciously.