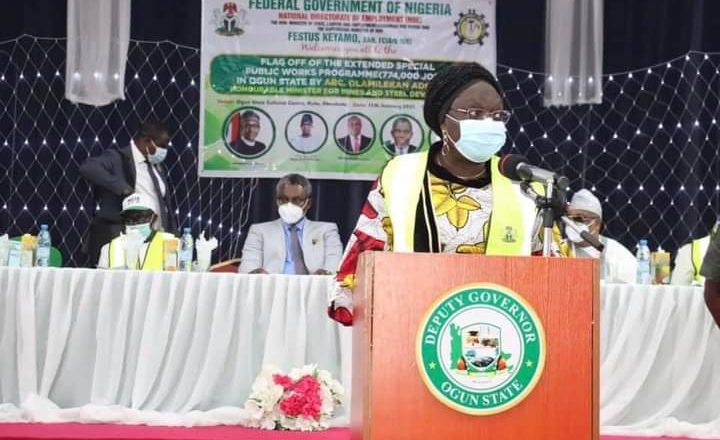 Expresses commitment to equipping youths to be contributors to Ogun socioeconomic development.

The Governor of Ogun state, Prince Dapo Abiodun, has said that the administration is resolute in its efforts to equip young people to be competent contributors to the growth and development of the State.

The governor who was represented by Deputy Governor of the state, Engr. Noimot Salako-Oyedele said his administration would continue to augment all efforts of government at the central, by ensuring improved standard of living for the citizenry as envisioned in its ISEYA mantra.

Gov Abiodun noted that his administration had put in place various provisions for job creation in its public works sector, as well as partnering with individuals and organisations such as the Industrial Training fund (ITF) to train youths in the State to be gainfully employed.

Earlier in his remarks, The Minister of Mines and Steel Development, Arc. Olamilekan Adegbite said the programme was designed to employ 1000 persons in each Local Government Areas across the federation.

Adegbite said the initiative was an outcome of the pilot SPW programme in the rural areas, approved by President Muhammadu Buhari and implemented by the National Directorate of Employment (NDE) in early 2020, saying the scheme was initially implemented in eight States of the federation to evaluate its impact on addressing high rate of unemployment.

“Under the National Economic Sustainability Plan (NESP), Ministry of Labour and Employment adopted a proactive approach, by engaging the nation’s youths in some important sectors of the economy.

“This strategy is intended to facilitate the creation of productive and inclusive societies in our nation. It is also aimed at shielding the most vulnerable from the ravaging effects of COVID-19 pandemic which includes, pervasive hunger, poverty, environmental degradation and joblessness”, he said.

Also, the acting Director General, National Director of Employment (NDE), Mallam Abubakar Nuhu Fikpo, represented by the South West Zonal Director, Mr Duke Edem, said the programme was a very significant step in Nigeria’s quest to win the war against mass unemployment, as well as to ameliorate the effect of COVID-19 pandemic.

According to him, ‘’communities across the country would receive facelift, through the activities of participants, as they would engage in specific community/environment public works activities, ranging from drainage clearing and maintenance, vegetation control, feeder roads maintenance, irrigation, great green wall and orchard maintenance among others’’.

In his goodwill message, the Akarigbo and Paramount ruler of Remoland, Oba Babatunde Ajayi, said the exercise would affect the lives of the participants positively, urging them to be good ambassadors of the State.

Also speaking, the Chairman of the State SPW, Senator Olugbenga Obadara, represented by his Vice Chairman, Dr. Babatunde Ipaye, implored the selected participants to be committed, efficient and dutiful throughout the duration of the exercise.