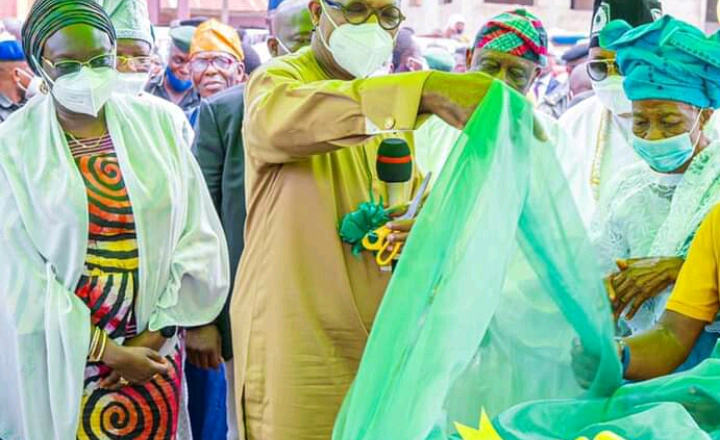 The governor, while commissioning the road leading to the home of the first civilian deputy governor in the state, late Pa Sesan Soluade, said the road which was chosen for reconstruction by his administration in conjunction with the Community Development Associations, traditional rulers and other stakeholders, would drastically reduce travel time and resolve traffic gridlock.

He noted that the road was among the first set of road projects initiated by this administration as part of its avowed commitment to the implementation of its Infrastructural Development Pillar.

The governor, who equally noted that the road was executed through direct labour under the watch of Ogun State Public Works Agency (OGPWA) to ensure minimal cost without compromising the quality of the job, emphasised that “the method provided direct employment to the youth in the project catchment area and engage local suppliers of materials, thus supporting our agenda of socio-economic development of the state and individual prosperity of citizens”.

“This project, Oke lantoro-Elite-Idi-Aba road, is 2.1 km in length. It will serve as an effective alternative and bye pass to those who are coming from either Lantoro or Obantoko area or Asero and going to Idi-Aba or Ajebo road. They would not need to go through Iyana Mortuary Junction.

“This will not only serve the purpose of reducing travel time and resolving traffic gridlock, it will also enhance the quality of life of residents around this area and increase the value of properties and become a source of prosperity to the owners, which is a major anchor of our governance vision.

“Let me reassure our people that construction, rehabilitation and maintenance of intra-city roads will continue across all the 20 LGs in the state. We have reinvigorated the Ogun State Public Works Agency, OGPWA, to take on this challenge. We will continue to look out, o cater for and attend to the welfare, well-being and wellness of the people of Ogun no matter where they live in the state at all time”. Abiodun stated.

He explained that his administration’s holistic and methodical approach to infrastructural development of Ogun, had informed the reconstruction of arterial roads linking the state with Lagos State, such as Ray Power Road and Ikola / Navy – Osi-Ota Road in Ota, Ijebu -Ode to Epe road, and Atan-Lusada-Agbara road which was flagged few months and due for completion next year.

The governor added that roads were being constructed in 18 out of the 20 Local Government Areas in Ogun, disclosing that via Transportation Masterplan the state will soon launch its ultra-modern mass transit bus system with the pilot scheme in Abeokuta metropolis.

While urging residents of the area to take ownership of the road and protect it from vandals, Abiodun disclosed that the reconstruction of the Phase 2 of the road from Oke Lantoro to Isale Ake on the other side of the Moshood Abiola way, will soon be commenced.

“Furthermore, I have given directive to relevant government agencies to dredge the canal that the water on this road drains into to ensure free flow of the drainage and preserve the life span of the road”, the governor added.

In their respective goodwill messages, the Alake and Paramount Ruler of Egbaland, Oba Adedotun Aremu Gbadebo, former governor of the state, Aremo Olusegun Osoba and widow of the first civilian deputy governor, Mrs. Esther Anike Soluade, lauded the governor for fixing the road, which according to them had subjected residents of the area and motorists to untold hardship.

They equally urged the governor to remain focused and work largely on legacy projects his administration will be remembered for.