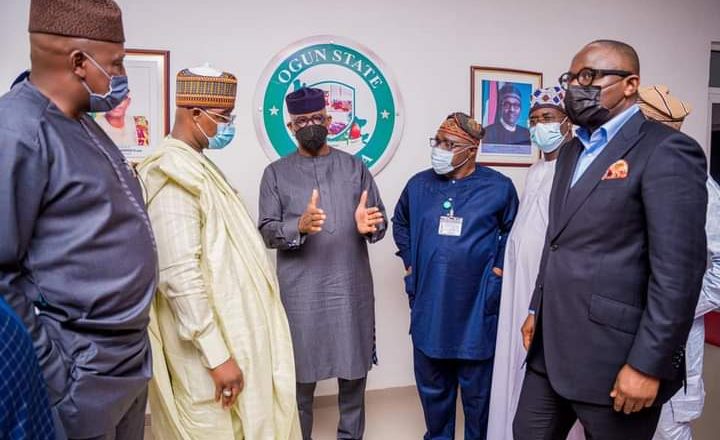 Governor Dapo Abiodun of Ogun state has sought the speedy approval of the N83.5 billion loan requested from the 1.68 percent Development of Natural Resources Fund (DNRF) from the Revenue Mobilisation Allocation and Fiscal Commission, (RAMFAC).

The loan, if approved according to the governor, will be used by the state to boost agriculture, tourism and other sectors of the state’s economy.

Abiodun stated this while playing host to members of Fiscal Efficiency and Budget Committee of RMFAC led by its chairman, Alhaji Adamu Dibal, in his office at Oke Mosan, Abeokuta.

The governor told members of the committee who were on evaluation tour of Ogun, that the release of the fund would help diversify the state’s economy as well as complete the ongoing construction of the Agro Cargo Airport.

He emphasised that the fund would also be used to develop the agriculture, solid mineral, cultural and tourism sectors towards the enhancement of Adire production and its chain values.

Abiodun noted that the Agro Cargo Airport which would be equipped with modern facilities and provided with Agro Processing Zone, when completed would serve as a Cargo Hub for the west-coast of Africa and provide job opportunities for the youths.

“We intend to tap into the Natural Resources Development Fund and knowingly fully well like you explained that 1.68% is being warehoused under this fund for the judicious allocation to the three tiers of Government by RMFAC. We believe that we can justify application for N83.5bn. In fact, it is a conservative request and I think it should be upwardly reviewed and because of the areas that we are looking at aggressively.

“Today, we are building the first real Agro Cargo Airport in the country, the decision for that airport was made before this administration, but it was a very objective decision. That location is about a kilometer or less from the busiest highway in this country and also about half a kilometer from the Lagos-Ibadan expressway. So, access and evacuation is not a problem, it’s got about 5,000 kilometers of land that has been preserved for the project”, he stated.

Abiodun maintained that the state has the highest number of reserves made up of cocoa, rubber, kolanut and palm oil reserves in the country, adding that “the state also produces the largest cassava, poultry and eggs in the country as well as the third largest producer of cotton and rice in the southwest region of the country”.

He further argued that “with the comparative advantage Ogun has over other states, we are seeking the intervention of RMFAC in providing us with this required grants that will allow us to invest in this areas.

“We have the Olumo Rock, different cultural heritage sites that we intend to further develop. We seek your support in the upgrade of these facilities, we also want to upgrade the production of our poultry and fishery industries”, the governor added

He also noted that Ogun has abundant mineral resources including limestone and granite, saying part of the fund would be used to address the problem of environmental degradation arising from the mining sites to ensure the safety of the residents.

He emphasised that his administration is poised at providing focus and qualitative governance by creating enabling environment for private investors to accelerate development across the state.

Speaking earlier, the Chairman of the Commission, Alhaji Adamu Dibal, noted that members of the Commission were in the state as part of the process required to access the sum of N83.5bn from the 1.68 percent Development of Natural Resources Fund requested by the state government in 2020 to diversify economy of Ogun.

He explained that the fund was one of the items under the Special Funds established by the Revenue Allocation Act of 2004 to help all the tiers of government in diversifying their economy base which in turn would create alternative sources of revenue and reduce dependence on oil revenues.

“You indicated that the fund will be used to assist the state in diversifying its economy particularly in the areas of agriculture, solid minerals and tourism.The resultant effect is to create employment, reduce youth restiveness, attract investors and increase internally generated revenue of the State”, the Chairman said.

Dibal, while expressing delight with potentials that abound in the state, said the Commission had been briefed by officials of the state on the sectors the fund would be channelled into, assuring that it would be fair in making sound recommendations for the state having in mind the objectives of creating the fund.