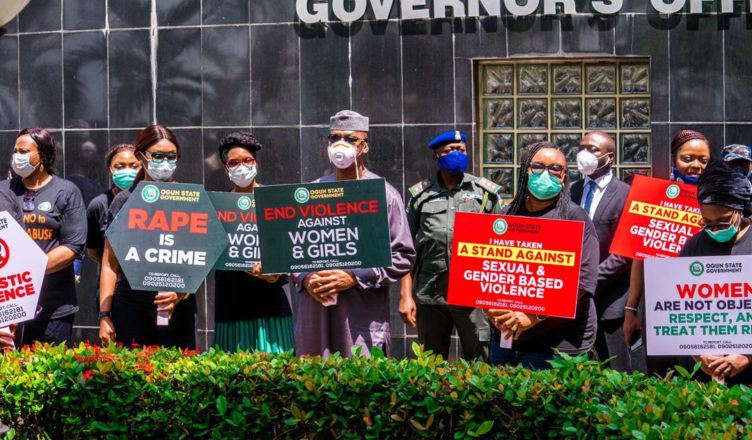 The First Lady of Ogun State, Mrs. Bamidele Abiodun called on the three arms of overnment in Ogun state to give unflinching support to matters concerning rape and gender based violence.

She made this call during a peaceful walk and awareness to the Executive and the Legislative arms of the state to solicit support for action against gender based violence and rape in the state.

She decried the gruesome rape and killings of Tina Ezekwe, Uwavera Omozua, Barakat Bello and Jennifer that occurred recently among others, stating that such crimes had been on the rise in the community demanded drastic and urgent steps to nip them in the bud.

She informed that the Governor, Prince Dapo Abiodun recently inaugurated a committee that would ensure the development of an effective, comprehensive and coordinated response to cases of sexual and gender based violence in Ogun state urging the committee to develop strategies to prevent and combat such acts.

Mrs. Abiodun emphasized her readiness and commitment to ensuring that survivors of the acts were not stigmatized or discriminated against in the society acknowledged the role of men in the struggle.

“We need to do more and ensure our survivors are not stigmatized; justice served; and the emotional and mental well-being of survivors is prioritized. I also humbly request that we continue to involve men in national conversation on violence against women. To men already supporting this cause, thank you for speaking up.”

She further stressed the need to educate and sensitize young boys and men who according to her were the perpetrators of the acts, to be protectors instead of being perpetrators.

“You are our fathers, our brothers and sons. Yet most of the violent sexual crimes committed against women are being perpetrated by boys and men. We need to educate our young boys and encourage them to be protectors and not perpetrators”.

In his response, the Governor of Ogun state, Prince Dapo Abiodun commended and thanked the First Lady and her team on the initiative and for being a voice to women folk who according to him formed about 50% of the world population.

He reiterated his commitment to ensuring that cases which bordered on women and girl child violence were expedited to bring the offenders to book assuring  that men in the Executive would lend their voices to the campaign and give women and girl child equal opportunities as well as empower them economically.

Earlier in his own response, the Speaker of the Ogun state House of Assembly, Rt. Hon. Kunle Oluomo  commended the First Lady and her team for their concern for the women folk and promised on behalf of the Legislature to give accelerated hearing and passage to any bill that affect women and children in the state.