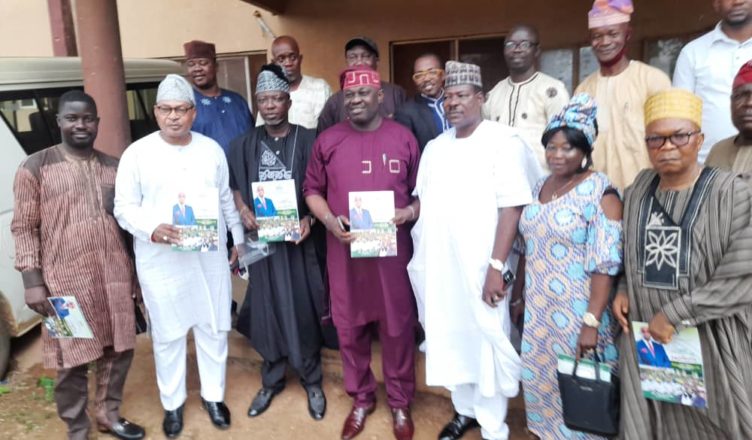 The Chairman of Ogun State chapter of Inter Party Advisory Council (IPAC), Asiwaju Abdulateef Adedamola, alongside principal officers and stakeholders of the council has commenced the tour of Local Government Areas in Ogun State.

The tour according to Adedamola, is one of the duties of IPAC as enshrined in its “Code of Conduct” to monitor and acess developmental projects embarked upon by the leadership of the council.

He added that apart from identifying the various projects embarked upon at the grassroots, IPAC will also have an interactive session with the management of the council to identify challenges faced by the local government and advise as appropriate.

Welcoming the team to his office, the Chairman, Transition committe of the council, Hon Fatiu Salami reel out his achievements in office since taking over the mantle of leadership in the council, thanking Gov. Dapo Abiodun for fulfilling his electioneering campaign by giving life back to local government administration in the state.

“I must specifically commend the governor of Ogun state, His Excellency Gov. Dapo Abiodun for fulfilling his electioneering campaign by restorimg life back to local government administration. We now have autonomy to run our local government on our own.

“This administration has commissioned a Health Centre at Maidan with the one in Lisa Village still under construction. Through the support of the state government, we have also delivered a block of 3 classrooms at Zumuratul Islamiyah Pry School, Ishasi Akute. In a bid to ensure provision of portable water in the local council area, we have delivered 3 modern boreholes to our people in Oke-Nla, Sunren and Olose,” he said.

Hon. Salami disclosed to the delegation that the council is one of the 5 most performing local government in the state.

Responding to the Transaction committee chairman’s speech, Asiwaju Adedamola commented the chairman for putting the public fund into judicious use.

Speaking on the occasion, the immediate past chairman of IPAC and the Ogun Labour Party chairman, Comrade Abayomi Arabambi, said the only way to develop the grassroots is by giving local council areas the freedom to operate on their own, commending Gov. Abiodun for restoring back to local government administration.