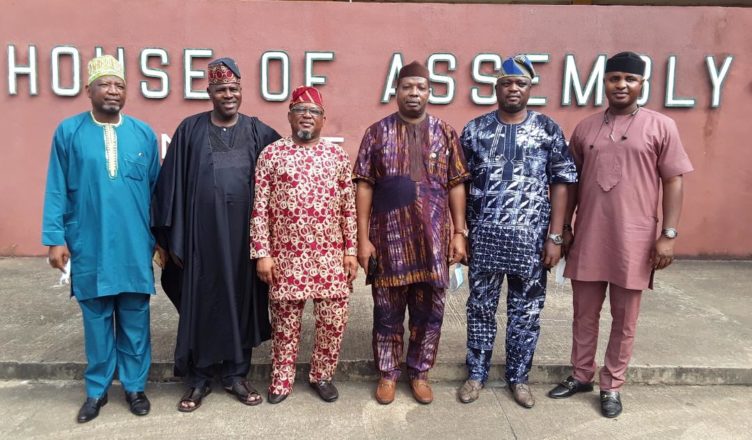 Concerned by the deplorable state of roads in their respective constituencies, which has been causing a lot of challenges to motorists and commuters, lawmakers in the Ogun State House of Assembly have called for the swift intervention and synergy where necessary between the State and Federal governments on Lagos Abeokuta, Sango-Idiroko, Sango-Ijoko- Agbado-Akute, Lusada-Ado-Ikoga, Atan- Ado, Ode-Omi-Lagos and Sagamu-Ogijo Roads amongst others.
The lawmakers including the Majority Leader, Yusuf Sheriff, Musefiu Lamidi, Ganiyu Oyedeji, Tunde Oladunjoye, Musefiu Lamidi and the Deputy Speaker Akeem Balogun took turn under personal explanation to decry the deteriorating state of the roads during a plenary presided over by Speaker Olakunle Oluomo at the Assembly Complex, Oke-Mosan, Abeokuta.
They called for the timely intervention of the State through the Ministry of Works and Infrastructure, State Public Works Agency (OGPWA) as well as the Federal Road Maintenance Agency (FERMA) to apply palliatives, where necessary to ease the suffering of road users whose socio-economic  activities were adversely being affected by the poor state of the roads.
Responding, Speaker Oluomo commended the State Government’s efforts at engaging the Federal Government to ease the plight of road users along Lagos- Abeokuta roads in addition to its untiring efforts of applying palliatives on the roads.
He consequently directed the House Committee on Works and Infrastructure to engage the State Commissioner for Works and Infrastructure and the General Manager, State Public Works Agency to further bring government’s attention to some of the roads in the State.
In another development, Speaker Oluomo has called on the Commssioner of Police in the State to link up with his Oyo State State counterpart to step up measures at monitoring and checkmating the excesses of their men and officers mounting road blocks along the State’s boundary with Oyo State, especially at Bakatari/Omi-Adio over sharp practices including alleged extorting and harassment of youths and other road users.
The Speaker made the call, while reacting to the submission of a member representing Odeda State constituency, Hon. Oludaisi Elemide, who raised the issue of extortion and harassment against the members of the Nigeria Police force mounting road blocks in the axis.
Oluomo also pleaded with well meaning individuals and philanthropists to lend helping hands to the children of the less privileged and indigent pupils in the society to have formal education especially in the face of economic challenges bedeviling the nation.
Meanwhile, the Chairman, House Committee on Local Government and Chieftaincy Affairs, Hon. Bolanle Ajayi today at the plenary, submitted the reports of the special ad-hoc committee on the harmonization of Obas and Chiefs Law in the State to the Assembly for necessary legislative action.