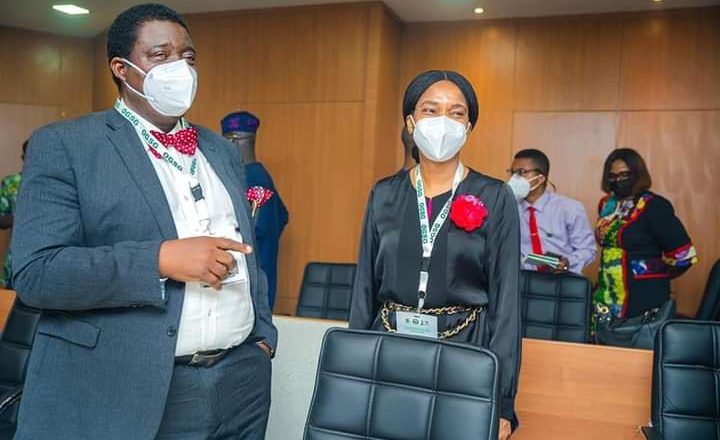 Ogun State has been described as the most suitable place for the African Development Bank and International Fund for Agricultural Development (AFDB/IFAD) Special Agricultural-Processing Zone (SAPZ) programme, the coordinators declared.

Both bodies expressed this while they were received by the governor of Ogun State, Dapo Abiodun in Abeokuta, on Wednesday.

The team from the African Development Bank (AFDB) and International Fund for Agricultural Development (IFAD) came on a Pre-appraisal Mission for development of Special Agro-Industrial Processing Zone, led by Dr. Chuma Ezedinma.

In his remark, the Country Director, IFAD, Dr. Patrick Habamenshi, noted that Nigeria as a country, has opportunity of achieving greatness through agriculture.

While stressing that the development of the sector is paramount to IFAD, Habamenshi urged the Governor Abiodun to support the team with the necessary logistics that may be required towards the successful implementation of the project.

Addressing the team, the governor declared that Ogun has potentials in the area of good road networks, power plant, rail, deep sea-port, gas pipeline, dams among others factors that promote industrialization.

He said with its current level of infrastructure, coupled with the concentration of agro-investors and nearness to raw materials and large market, Ogun is naturally a SAPZ location and suitable for SAPZ innovation and case study.

“There is a level of coordination, aggregation and agro-transformation currently going on in the state, as the largest hub for both conventional industries and Agro Industries, which are located near Lagos, one of the largest markets in Africa.

“The improved coordination of aggregation, processing and access to large markets that will accompany the much desired SAPZ, will transform lives, commerce and well-being of people in Ogun State, Nigeria, Africa and the World at large”, he said.

Abiodun added with the earmarking of 20,000 hectares of land including advance level brown field activities, the state has taken the AfDB SAPZ initiative to a higher level, emphasising that the commencement of the Cargo Airport, whose first phase would be delivered in 2022, would complement export opportunities and nationwide supplies.

According to him, the state was happy to be chosen as one of the benefitting states in the country, saying the project was in line with the administration’s economic agenda.

“I note with great pleasure, our agenda to pursue international collaborations, which is leading us, with hopes from the AfDB SAPZ initiative, just like our collaboration with IITA which has helped us deliver on key Agricultural outputs, with extraordinary performances”. He stated.

He expressed delight at the progress made by the state in the Federal Government of Nigeria/International Fund for Agricultural Development’s Value Chain Development Programme (VCDP), whereby 13,000 people had been linked to credit market and jobs as well as benefits of infrastructure, markets, roads, land clearing and others.

“Since inception of this administration in May 2019, our agricultural agenda has been bold, daring, ambitious and exemplary. From registration of over 80,000 people (mostly youths) for Agricultural value chain opportunities, to linkage of over 15,000 people to credit, input and guaranteed market and productivity in the FGN/CBN Ogun Anchor Borrowers Programme and other programmes, despite a restrictive COVID-19 year, and a host of others.

“The gathering of global agricultural authorities and experts, as part of our administration’s bid for the Special Agro-Industrial Processing Zone (SAPZ) Project, is an indication of our government’s continuous effort to seek partnership and collaboration, in its resolve to support all levels of agricultural activities to achieve food security”, Abiodun pointed out.

The governor further reiterated that the aim of his government was also to create jobs and link primary producers and youths to the industrial process, and promote agricultural Industrialization, expressing the hope that the private sector participants would play a leading role in the SAPZ implementation, which would align with current reforms in the state.