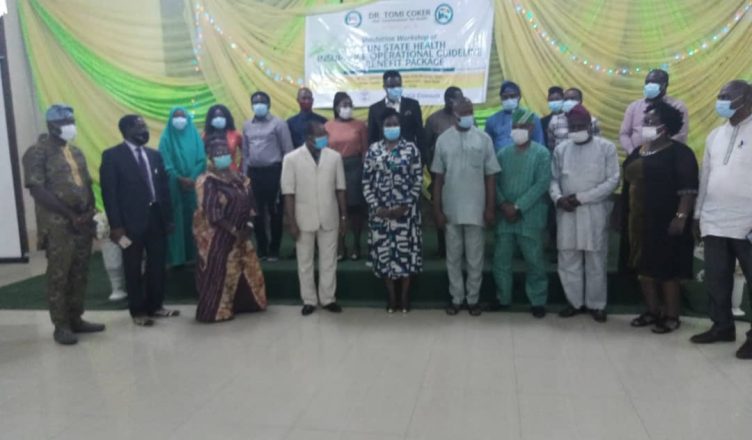 The Ogun State Government has said that the implementation of the Universal Health Coverage which is no longer a luxury but a necessity, would ensure that people do not pay out of their pockets to treat common ailments.

This was disclosed by the Commissioner for Health, Dr. Tomi Coker during the opening ceremony of the validation workshop on the operational guideline and benefit package of the scheme, held in Ijebu-Ode.

Coker said that the process which started with the enrollment of the vulnerable into the Basic Health Provision Fund, would further focus on the formal and informal sectors in the state.

She said that the three-day workshop was aimed at developing the operational guidelines and validate the benefit for the Ogun State Health Insurance Agency (OGSHIA), which is responsible for managing the process.

Describing the package as a viable one, the Commissioner said that minimum benefits the scheme will deliver include the treatment of malaria, hypertension, diabetes, tuberculosis and sickle cell, among others.

“The vision of our Governor Dapo Abiodun is to achieve Universal Health Coverage. We are here to forge a document will guide us towards achieving this goal. The guideline will also make us accountable.”

“The minimum benefit we will deliver to our people include malaria, hypertension, diabetes, sickle cell and tuberculosis diseases, among others,” she said.

The Commissioner called on all stakeholders to key into the benefit of the Universal Health Coverage and Health Insurance Scheme, noting that health cannot be funded by government alone.

She said that the scheme would be formally launched in the state in few weeks, just as she pointed out that enrollment of people would begin soon across the State.

In his remarks, the Permanent Secretary, Ministry of Health, Dr. Adesanya Ayinde, expressed optimism that the implementation of the Universal Health Coverage will do alot of good to the image of Ogun State and boost the profile of the present administration.