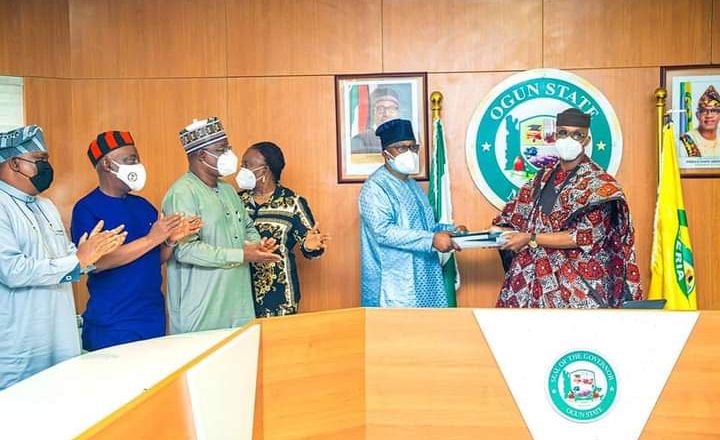 The Ogun State government have concluded plan to continue with the plan to construct an agro-cargo airport in the state.

This was disclosed by the State Governor, Prince Dapo Abiodun on Friday, when he received the Senate Committee on Aviation, led by Senator Smart Adeyemi, at the Exco Chamber of the Governor’s Office, Oke-Mosan , Abeokuta.

The governor said that the agro-cargo airport project, conceptualized by the Gbenga Daniel administration in 2007, has lots of potentials in the overall development of the state in particular and the country in general.

It would be recalled that the immediate past administration of Senator Ibikunle Amosun jettisoned the idea of a cargo airport, opting instead, in 2018,for a passenger airport with its proposed location in the Ewekoro area of the state.

However, Governor Abiodun noted that what Ogun State is yearning for is an airport that will support its massive agro development potentials.

Prince Abiodun maintained that the people of the state entrusted his administration with qualitative representation to create the enabling environment for a public private sector partnership, which is fundamental to the creation of an enduring Economic Development and individual

According to him, the decision to continue with the agro- airport project, located in Ilishan-Remo in Ogun East Senatorial District, was made by the state’s joint inter-ministerial committee, which evaluated and placed priority on it as against the Ewekoro passenger airport.

Governor Abiodun noted that a lot of verifiable work had started on the agro-cargo airport project, which had the approval of the federal Ministry of Transportation and the Nigerian Civil Aviation Authority (NCAA).

He, however, informed the committee that there were no details or information on the Ewekiro project in the handing over note of the Amosun’s administration.

“This administration is deliberate and methodical. The need to have a Cargo airport was made by our joint inter ministerial committee and we consequently evaluated the initiatives that were started by previous administrations because government is a continuum.

“After a thorough evaluation, the choice of the Airport cargo location in Ilishan was unanimous, it complements the Agric/processing factories eco system in that corridor with access/egress road network.

“To that extent, our decisions are guided by the principles of good governance; is it fair, just and equitable to all, is the process transparent and inclusive?Did the people input?Is it of economic important/value? Will it possibly impact the life of our people? As we must hold ourselves accountable at all times. Afterall the people are the essence of Governance and we are only holding the office in trust for them.

“Again, government is a continuum, we are completing this project that was conceptualized by a previous administration same way we have completed other projects (like) roads, bridges, hospitals and schools that were started by the previous administration. Our decision are always based on the economic value and benefits to our people.

“Comparatively on the other proposed airport location, we did not find any details or information in any handover notes as it all seems to be shrouded in secrecy,” Abiodun said.

Abiodun said that a committee led by the national president of the Nigerian Society of Engineers (NSE), commissioned to investigate the proposed Airport, found out in its report that there was no approval by the ministry of aviation nor the NCAA.

Besides, it was also found out that while some consultancies were awarded, there were no deliverables

He also noted that the proposed location for the airport has the largest cement factories in the country, and that those factories are emitting dust particles and pollutants into the sky.

He, however said that his government has redesigned the location for a more complimentary purpose to the factories as trailer/container transit terminal and park.

He solicited for the support of the Committee for the first international cargo airport in Nigeria, adding that the first phase is expected to be completed by May 2022.

The State Commissioner for Finance, who doubles as Economic Adviser to the governor, Mr. Dapo Okubadejo, in a presentation described the project as a viable one which according to him would unlock significant value addition opportunities across agriculture and manufacturing sectors.

“This cargo airport is located within the agricultural belt in the state and strategically located at the interconnection between the East -West highway (Sagamu-Benin) and the North -South highway (Lagos-Ibadan),” he added.

In his remarks, a member of the committee, Senator Solomon Adeola, representing Lagos West, maintained that Ogun needs a cargo airport than a passenger one.

He added that the Committee would look into the project.

Another member, Senator Biodun Olujinmi promised that the Committee which was a fact finding mission would delibrate on it’s findings about the two projects and come up with a report to be submitted before the Assembly.