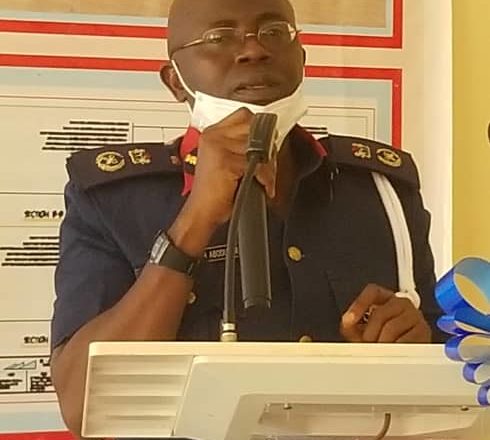 The 2020 edition of the World Peace Day with the theme ” Shaping Peace Together” was celebrated by the Corps on Monday, the 21st Septmeber, with peace ambassadors within the State in attendance.

The celebration was characterised by lecture which was delivered by Dr. Segun Ogunyanwo, the Registrar/Chief Executive Officer, Institute for Chartered Mediation and Conciliation (ICMC), and official foundation laying of Ogun NSCDC Mediation Centre named after the Commandant General of the Corps, Mr. Abdullahi Gana Muhamadu.

In his lecture, Dr. Ogunyanwo advocated peace as the ultimate source of stability for individual, group or a nation.

He stressed,”that upon completion of the mediation centre, the Corps will further be adequately equipped in the propagation of peace”.

While speaking, the Chairman of the day, Mr. Sunday Shem Obafaiye, the Zonal Commander in charge of Zone “F”, Abeokuta, who also urged people of the State to embrace peace as a factor which remains the only vehicle capable of uniting the world.

The awards, according to the State Commandant, Mr. Hammed Abodunrin, was based on the numerous roles the personalities played in maintaining peace in the state.

Recall that the 2019 edition made the Command embark on massive tree planting as the theme for the year was Climate Action for Peace.