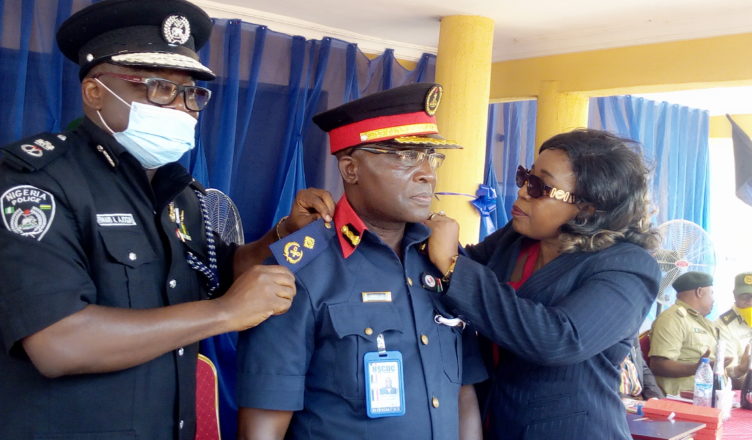 The Ogun state Command of Nigeria Security and Civil Defence Corps have promoted 209 officers from level 8 to 14 in a ceremony yesterday at his state headquarters Dekudu village along Kobape road Abeokuta SAGAMU Express Road Abeokuta.
The state commandant,Hammed Abodunrin in his opening remark, appreciated the state government for constant support and encouragement through the Security Trust Fund and other security agencies in the fight against crime in the state .He said the ICT center would enable officers to fight internet crime and other social vices in the society.
The state governor Prince Dapo ABIODUN Mfr,who was represented by the SSG, Mr Tokunbo Talabi said the security of the state remains one of the major focus of the government,and would do everything to make it effective.He added that the government were impressed with the commands commitment to strengthen the security through the Corps.
Mr Talabi said the mobile forensic unit should be adopted by other security agencies in the fight against crime in the state.
The event also witnessed award ceremony to prominent individuals in the security sector.The Ogun state Commissioner of Police,CP Edward Ajogun was given an award along side others.
The event was graced with Government representatives and public functionaries,among them was formal Senator Gbenga Obadara.