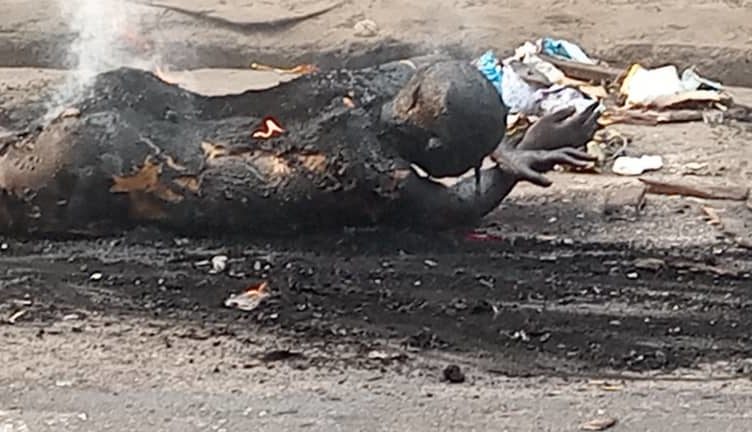 The Ogun state police command has warned the general public on taking laws into their hands and applying jungle justice on people suspected of crime.
This was contained in a release by the command Public Relations Officer, DSP ABIMBOLA OYEYEMI today in Abeokuta.He said,”the recent one was the unfortunate incident that happened in Aseese area of Mowe in Obafemi Owode LG area of Ogun State, where three people were beaten to death and their vehicle set ablaze on mere suspicion of theft, the allegation that has not been substantiated by any one.
It was the quick Intervention of police from Mowe Division that saved the other two from being gruesomely murdered.”
He added that,”another group that is guilty of this barbaric act is the okada riders who are always in the habit of attacking motorists involved in an accident with any of their members.
Their usual practice is to set such vehicle ablaze regardless of whether their member is at fault or not.”
The command has warned that such unlawful behavior will no longer be tolerated in any part of the state, and anybody caught in such dastardly act will be decisively dealt with in accordance with the dictate of the law.

” In as much as every member of the public has the power to arrest anyone who is suspected to have committed a crime, the provision of the law is that such arrested person should be handed over to any of the law enforcement agencies for proper investigation and prosecution.
It is therefore an act of barbarism for anybody to apply jungle justice on anyone no matter how weighty is the allegation levelled against such person.

“Human life is sacred, and it is sacrilegious for anybody to unlawfully take another person’s life.”
Those who are fond of this primitive act are hereby warned to desist from it henceforth, as the command will not leave any stone unturned to hunt for any one culpable of this act and bring such person to justice. To be warned is to armed.”He explained.