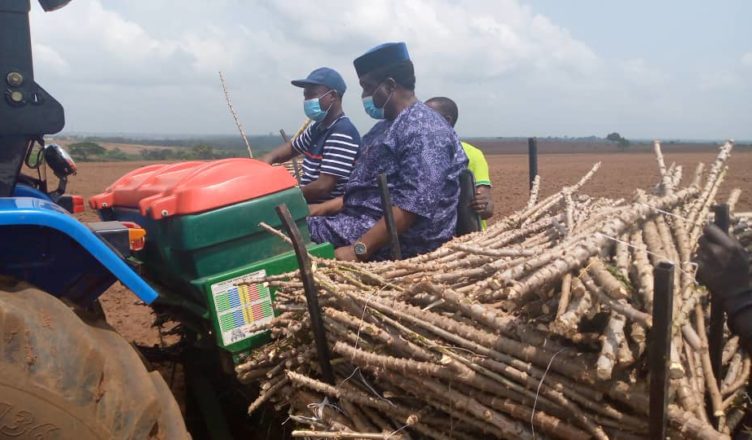 Determined to attract and encourage young Cassava Farmers under its Anchor Borrowers’ Programme and to further ensure employment, food production and industrialisation, Ogun State government has commenced a 200 hectares for the youths with another 10 hectares demonstration farm at Ikenne Farm Settlement, Ikenne Local Government Area of the State.

The technology based demonstration farm, according to the Commissioner for Agriculture, Dr Adeola Odedina in an inspection tour to the farmland, would serve as training ground for beneficiaries of the State’s third batch Anchor Borrowers’ Cassava farmers and youths who want to invest in cassava farming under Anchor Borrowers’ Programme.

“You will recall that the Governor, Prince Dapo Abiodun recently empowered 1,065 young Cassava Farmers with linkage from the Central Bank of Nigeria. This is one of the locations where this young farmers will be carrying out their business and the State Cassava Revolution Programme has commenced planting of 10 hectares demonstration here mechanically so that by next week, we start training the youths on Cassava production Enterprise using high technology.

“Agriculture is technology-based and you want the youths to embrace Agricultural technology, you need to show them the right one, we are siting the demonstration ahead of their arrival to take possession of what the governor facilitated for them. They are not paying for the land, it is also one of our strategies of bringing development into farm settlements, we also have other Agric investors here as well, so if we now have the youths, it will further accelerate development of the settlement”, he disclosed.

Odedina stated that the young Cassava farmers will be guided and exposed to training with a view to getting good yields so that they can repay their loans saying, the state government was making available new Agricultural opportunities and support aside the provision of land, trainings and market.

He asserted that the present administration had successfully created more than 5,000 jobs in the Cassava sector alone hence, making the governor’s promise of using Agriculture for job creation, good security and Industrialisation among others a reality.

In her submission, the Project Director, Ogun State Cassava Revolution, Mrs Kehinde Jokotoye noted that the era of cutlass and hoe for farming is past, saying to woo energetic youths to farming mechanisation must be encouraged through a model that could be followed.

“We want to make Cassava farming very attractive to the youths that is why we are going fully mechanised. So, from Land clearing, preparation,planting and herbicides application, were all mechanised and we know that this is the kind of operation the youths will like to see and a model to follow”, she said.

Jokotoye expressed optimism that with the expertise used on the demonstration farm, 40 tons of cassava tubers are expected per hectare after harvest.

She enumerated some by-products of cassava to include starch, ethanol, glucose, animal feeds, textile, among others aside staple foods.

In company of the Commissioner on the inspection is the Permanent Secretary, of the Ministry, Dr Dotun Sorunke.