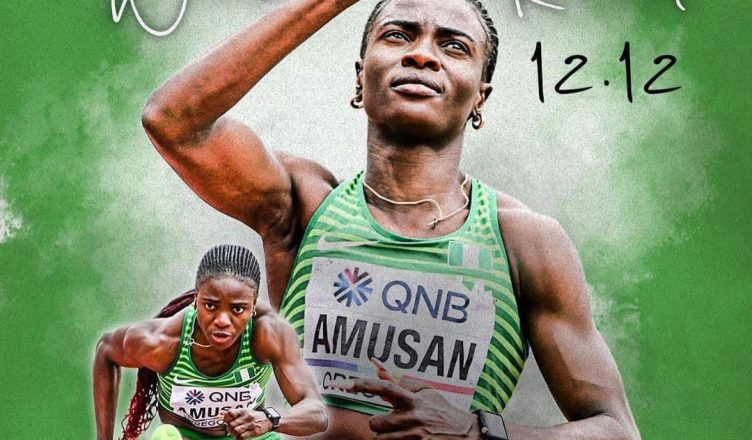 … we are proud of you

Ogun State Governor, Prince Dapo Abiodun today felicitated with world-class sprinter and new world record holder, Tobi Amusan, saying: “This is another superlative record coming from an Ogun State indigene. She has reconfirmed Ogun State’s standard of excellence now in sports and we are very proud of her”.

In a statement by his Chief Press Secretary, Kunle Somorin, in Abeokuta, Prince Abiodun said Amusan’s feat at the 2022 World Athletics Championship, held in Eugene, Oregon USA,  “is heart-warming and a thing of pride not only to the black race, but the nation and Ogun State in particular”.

Prince Abiodun, who recalled how his administration, during the COVID-19 pandemic announced the adoption of the talented Ijebu-Ode-born athlete as proposed by the Minister of Youths and Sport, Sunday Dare, when he visited Ogun, said” we supported her. We are a state of many firsts. Here is another testimony to that fact. I am very proud of that feat in Oregon. She’s one of our major exports in sports and we are happy to be associated with her”.

The statement also added that,” That was the second time Amusan would break the record on the night, improving on her 12.12s in the semi-final. It was previously set by America’s Kendra Harrison’s at 12.20s.

“On a night of many firsts, Amusan became the first Nigerian athlete to ever set a World Record in any event. It will also be the first time the Nigerian anthem would be played over the public address system during a medal presentation as the winner of an event.

“Amusan’s victory, will for her, be some sort of compensation for a disappointing outing in Tokyo last year where she finished fourth in the final despite being touted to take one of the medals.”

Prince Abdiodun also said,” As she walks away with a $100,000 prize money, on behalf of the government and people of Ogun State, I congratulate one of our finest in the world of sport. I want to urge her to now turn her attention to the Commonwealth Games beginning on Thursday, July 28 where she’s also the defending champion.