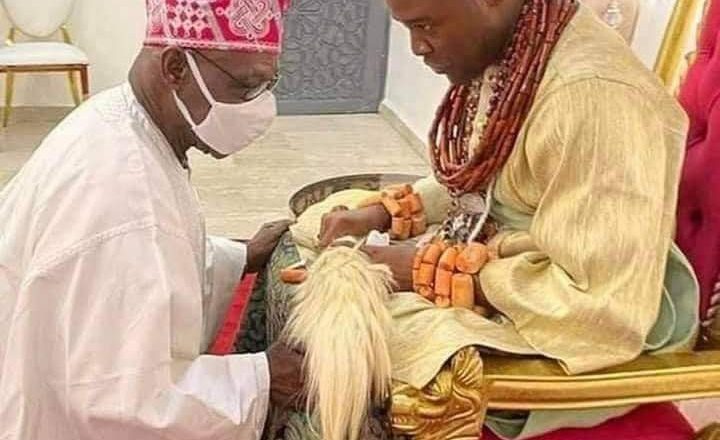 The former President, Chief Olusegun Obasanjo,yesterday said Royal fathers are traditional and spiritual head and should be addressed as Royal Majesty,not Royal Highness.
Chief Obasanjo made this known during the thanks giving service of the new Olu of Warri,Ogiame Atuwatse III.
The former President who rejoiced with Itsekiri people for the coronation of the Olu,said the British colonial masters who didn’t want anyone to share the title of “Your Majesty” with the Queen of England,made Africa to adopt” Your Highness”.
He added that,”I’m so exited to see this new Dawn in the land of Itsekiri as your Majesty crowned as the 21st Olu of Warri .I am one of the happiest on your installation because God has specially favoured me to see three Olus and I don’t pray to see a fourth one.I want to emphasise that the position you occupy today is given to you by God, but with your own people surrounding you, and you must always remember that.”
Chief Obasanjo advised the Olu to work on the unity of the people,and must make God first in all his doing.He added that the royal father must seek the wise counsel of elders for his reign to be peaceful and progressive.
Chief Obasanjo,alongside Governor Ifeanyi Okowa of Delta State led the pack of dignitaries that attended the coronation thanksgiving of His Royal Majesty, Ogiame Atuwatse III.