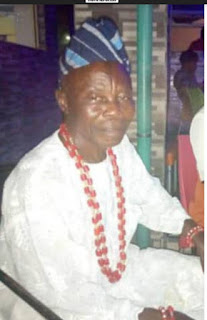 …Ajiki is a wounded snake, desiring what does not belong to him… Chief OGUNSOLA,Baaloye of Ijeja

The Oluwo of Ijeja, Chief Mukaila Atanda AKINWANDE have denied reports that he was arrested yesterday and detained at the Ibara Police station for parading himself as the Oluwo of Ijeja.
Chief Akinwande said he was invited for questioning on the Oluwo stool which one Ajikiolu have gone to court to contest.
The Oluwo while speaking with our reporter on phone said he went to the police station with his community people and chiefs,and left few minutes later when Ajikiolu refused to show up at the station as he was the complainant.
Though,the Divisional Police Officer at the police station advised Chief Akinwande to remove the Oluwo display flex in front of his house, pending the determination of the case at the court.

He said,”The public need to ignore his desperation, because the stool of Oluwo of Ijeja is not vacant.I don’t know why he would result to blackmail on a case of litigation.If he desires the throne by all means,he should wait till the court will decide.Ajikiolu has no court injunction, or warrant of arrest that can allow him to do such thing.His days of deception are numbered.Alake of Egbaland installed the Oluwo and there is nothing Ajiki can do about it.He should wait till the determination of the case by the court.”