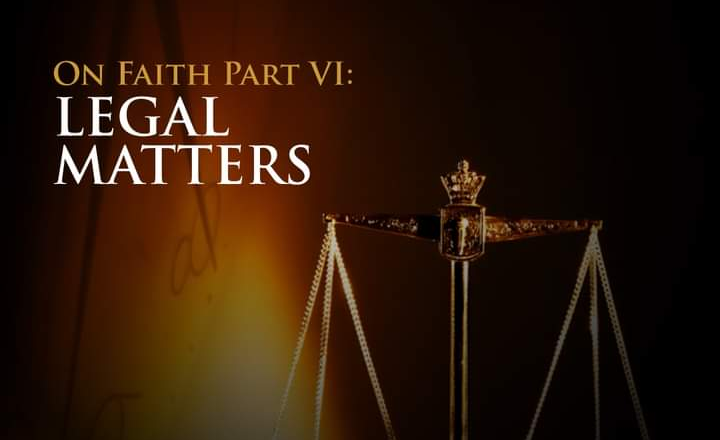 It’s virtually impossible to appreciate the full ramification of the New Testament without recourse to the legal construct undergirding it. The New Testament is resolutely mounted on a tripod of commercial law, criminal law and constitutional law. There are other legal dimensions but those are the major three. Without those legal authorities the New Testament will not be efficacious in heaven, on earth or under the earth. It will just be history.

That’s not to say only lawyers can appreciate the New Testament. It’s the Holy Spirit that unveils the word. But there’s a way and manner a Paul would read the scriptures that Peter can’t. Paul had formal training in Mosaic law. His dean was Gamaliel. Acts 22:3. Peter on the other hand was an ordinary fisherman, and you can see the difference in their writings. It’s like those first few verses in the book of Genesis. A cosmologist or quantum physicist would salivate over them. He has a technical grasp of the issues. When he reads, Let there be light, he’s thinking photons, we’re thinking light projection like in a dark movie theater. He’s probably thinking of the speed of light as well – 299,792 kilometers per second. We won’t.

Every major terminology in the New Testament is a legal terminology. Redemption is a clear example. Redemption is a commercial law principle. It speaks of the right to regain ownership of property by freeing it from a debt, charge or lien. Colossians 2:14 says God “cancelled the record of debt that stood against us WITH ITS LEGAL DEMANDS, set it aside and nailed it to the cross.” That’s “the redemption of the purchased possession”. Ephesians 1:14. We were bought with a price. 1 Corinthians 6:20. We were then sealed with the Holy Spirit as a first installment on God’s promises to us, a reminder we’ll get everything God planned for us. The Holy Spirit is thus a down payment on God’s promises. Ephesians 1:14 MSG. Salvation is a commercial law transaction.

There are two other legal fields at play in the New Testament. They are criminal law and constitutional law. The death of Jesus is largely based on criminal law whereas his resurrection, ascension and session in heaven are constitutional law matters. He would devolve certain rights to us after his ascension. Those rights are inalienable, meaning they cannot be taken from us. We can’t surrender them even if we want to. It’s one of the reasons we can’t lose our salvation.

Indeed, the very phrase, “New Testament” is itself a legal term. There are two senses in which the Bible uses the phrase. In the first sense the New Testament is talking about a will. Jesus left us a will after his death. A will is a legal instrument apportioning assets after death. It’s why the King James bible in Hebrews 9:16 uses the word, “testator.” That word is used to this day in the drafting of wills. A testator is the person who dies, leaving a will or testament. It is this idea of will the book of Hebrews was elucidating on: “Now when someone leaves a will, it is necessary to prove the person who made it is dead. The will goes into effect only after the person’s death. While the person who made it is alive, the will cannot be put into effect.” Hebrews 9:16-17 NLT. It says the proof of the death of Jesus is his blood, and because of that proof of death his will went into effect. It’s how we got our spiritual inheritance. The death of Jesus “marked the transition from the old plan to the new one, cancelling the old obligations and its sins, and summoning the heirs to receive an inheritance that was promised them.” Hebrews 9:16-17 MSG.

But then that passage says Jesus “brought together God and his people in this new way.” Hebrews 9:17 MSG. That leads us to the second sense in which the phrase, New Testament is used. The second sense in which the phrase is used is constitutionally. It is a social compact. God made an agreement with mankind. Nothing captures this better than the words of Jeremiah: “But this is the covenant that I will make with the house of Israel after those days, declares the Lord: I will put my law within them, and I will write it on their hearts. And I will be their God, and they shall be my people.” Jeremiah 31:33. Referring to this passage, Hebrews 8:7 tells us that “if that first covenant had been faultless, then should no place have been sought for the second.”

The relationship between God and mankind under the old agreement was adversarial and very toxic to say the least; whereas under the new agreement the relationship is conciliatory. There’s rapprochement. In 2 Corinthians 5:19 we’re told that God was reconciling the world to himself, not counting people’s sins against them. It is for this reason angels announced goodwill towards ALL men at the birth of Jesus – “Glory to God in the highest, and on earth peace and good will toward humankind.” Luke 2:14. God was extending the olive branch. The arduous nature of the relationship between God and humanity was why the provisions of the law of Moses were severe. It was an impossible situation. You could never please God by obeying the Ten Commandments. You still can’t. “No one can ever be made right with God by doing what the law commands. The law simply shows us how sinful we are.” Romans 3:20 NLT. The King James translation of that passage used the term “justified” – “Therefore by the deeds of the law there shall no flesh be justified in his sight.” That word is a legal terminology. In criminal law, justification means to be exempted from criminal liability. Charges are dropped. What the Bible is saying is, God has dropped all legal charges against us. God is not holding your sin against you. It’s either you believe that or not. But you better do because it’s liberating.

The death of Jesus is what lawyers refer to as vicarious liability. Vicarious liability means someone took on the legal liabilities of another person. Jesus paid the price for our sins. Sin is a criminal offence. It’s why Jesus was subjected to capital punishment. The wages of sin is death. Romans 6:23. It’s a lack of understanding of biblical jurisprudence that makes us imagine we can do good to get saved. That’s like a murderer saying he should be absolved of his crime just because he gave alms to the poor, or because he helped a widow. You can’t pay for a capital offence by fulfilling a civil obligation. Sin is not a tort. A tort is a civil wrong. It’s why Jesus couldn’t pay for our sins with all those good he did. Acts 10:38. Or they would have saved us. He did a lot of good. But he had to go to that cross. He was crucified as a common criminal with two robbers. Those weren’t petty thieves, they were violent robbers. They had murdered. It’s why the thief on the right side told the thief on the left THEIR crucifixion was justified, but Jesus was an innocent man. Luke 23:41. The charge of treason against him was as bogus as they come. It was the only lie that could stick. The accusation about wanting to destroy the temple and rebuilding it within three days fell under religious law. That’s outside the purview of Roman authority, so they accused him of insurrection against Caesar instead.

The Bible says Satan is THE accuser of the brethren. Revelation 12:10. That’s not gossip mongering it’s talking about, it’s real prosecutorial stuff, like in a court of law. Or we wouldn’t need a defense attorney. Jesus is our advocate. 1 John 2:1. His omnibus defense is justification – “Who will bring any charge against God’s elect? It is God that justifies.” Romans 8:33. The modern equivalence of justification is acquittal. You’re acquitted because Jesus has been judged on your behalf. In criminal law you can be discharged but not acquitted. Which means you can be tried for the offence again. Acquittal on the other hand means nobody can prosecute you for the same offence again. That’s the rule of double jeopardy. Because some Christians don’t know they’ve been acquitted they keep begging God for forgiveness for the same sin. They don’t believe God has forgiven them. They keep responding to the memory of the sin and their bad conscience. Some resort to penance and restitution but that’s an affront to the sacrifice of Jesus. Once you’ve asked God for forgiveness your sin is forgiven, and forgotten. The blood of Jesus cleanses you from all unrighteousness. 1 John 1:7. Because of guilty conscience some can’t claim their healing from God. They believe their sickness is a punishment from God. But if Jesus went about doing good and healing all that were oppressed of the devil, why would the same Jesus be doing the rounds putting sickness on people? Is he schizophrenic? Doesn’t make sense. Acts 10:38.

Righteousness is in fact a constitutional principle. As enunciated in scriptures it is the totality of the sovereign rights of God, his essence, as well as his brand. Everything God does is righteous, just because he’s God and nothing else. You can’t judge what he does. What standard will you use? You can’t question God. Isaiah 45:11. In the exercise of his sovereignty he chose to save the descendants of Abraham and not those fallen angels. Hebrews 2:16. Both species were fallen but he chose to save humans. And then he did something extraordinary – he devolved his rights to us having designated us his heirs. We became not only like him, we actually became him. He is in us, we are in him. Total identification. As he is so are we. 1 John 4:17, 2 Corinthians 5:21. We don’t have righteousness therefore, we ARE righteous. Our righteousness is existential. We can’t become unrighteous. Unlike in the Old Testament where they did righteousness to earn God’s approval, in the New Testament righteousness is a gift of grace. You don’t do anything to become righteous in the New Testament. You’re made righteous. Because of this righteousness we can boldly approach the throne of grace. Hebrews 4:16.

So, stop being timid. Stop all the I’m unworthy religious stuff. 1 John 3:1. Sorosoke. Exercise your constitutional rights. 2 Timothy 1:7. You are the righteousness of God in Christ.

This has been a crash course in biblical jurisprudence.

To read On Faith Part 6: Legal Matters go to www.myilluminare.com/on-faith-part-6-legal-matter/.

*To understand the Christian walk from a contemporary perspective, read my book, Conversations of a 21st Century Saint. Order at https://lekealderstore.com.