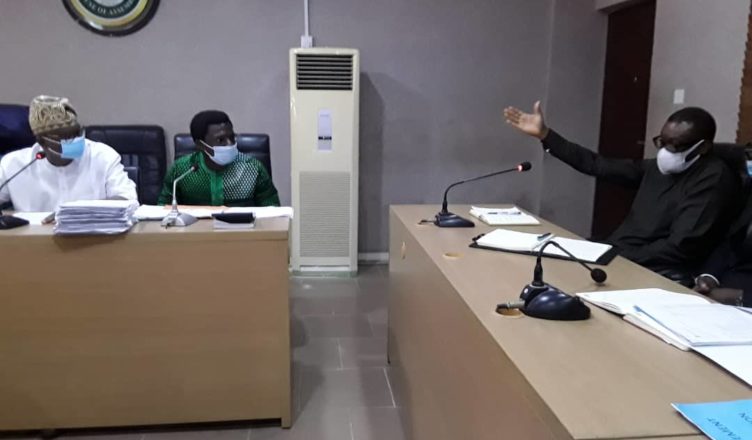 More facts emerged today as the members of the Ogun State House of Assembly Committee on Public Accounts and anti-corruption again took on the former Managing Director of the State Property and Investments Corporation (OPIC) Barr. Jide Odusolu, in continuation of the consideration of the financial reports  of the Corporation between  2015 and 2019, where it was revealed that Odusolu  disposed-off landed property it purchased for over N515m at Isheri and valued at N848m at a giveaway price of N164m for half of its  portion. This is even in spite of over four year- term of expected appreciation on the property which was sold off barely ten days before the exipiration of the last administration in May, 2019.
The Chairman of the Committee, Musefiu Lamidi in company of his Vice,  Abdul Bashir Oladunjoye and other lawmakers including the Minority Leader, Ganiyu Oyedeji, Chief Whip, Atinuke Bello, Honourables Yusuf Amosun, Olakunle Sobukanla, Damilola Soneye, Solomon Osho, Oludaisi Elemide and Abayomi Fasuwa questioned the former MD on why over N40m could not be accounted in the construction expenses of the MITROS Residence, Ibara, which was carried out during the period under review.
Acknowledging the submission of audited financial statement for 2018-2019 and the management letter on the financial statement by the Corporation in response to the previous meeting held with Odusolu on October 13th 2020; the House  Committee decried the manner in which the former MD spent the total sum of N881m on the construction and procurement of equipment for the Mitro Residence at Ibara without the approval of the State House of Assembly, while the Committee members also requested for clarifications on the role of the OPIC Board in the running of OPIC as well as the process of the project execution.

Lamidi further confronted the MD with the Corporation’s  inability to keep fixed assets registers, likewise the non-availability of cash book and bank reconciliation statements on demand to external auditors, who equally noticed that from sample of daily cash schedule,  cash received were not fully lodged.
All the infractions the lawmakers pointed out were in contravention of the Appropriation Laws for the period, as well as in contrast to the International Public Sector Accounting Standards (IPSAS) and the State Financial Regulations, which equally mandated the keeping of up-to-date fixed assets register by government Ministries, Departments and Agencies.
Consequently, the Committee directed Odusolu to re-appear on Wednesday, 25th November, 2020, the date he freely picked by himself as a convenient date, having taken permission to only stay for maximum of two hours for today’s proceeding on account of ill health to avail the Committee of more documents and clarifications on all records including projects and other transactions carried out under his watch.
Others requested by the lawmakers  included land sales, properties, lease/rent amongst others with specifications of their respective location, sizes, type of building and cost facilities external to the building such as access roads and paving amongst others which was to be submitted on or before Wednesday, November 11th, 2020.
Responding, Odusolu noted that though, he didn’t secure the approval of the State House of Assembly for the Mitro project, but had approval of the former Governor Ibikunle Amosun for the construction, noting that the N40m was part funds spend in the course of the construction of the Mitro Residence.
He claimed that the housing projects at Isheri had been concluded under a shell in construction but was controverted by the lawmakers with pictorial evidence, just as he disclosed that the law setting up the Corporation allows the MD to report directly to the State Governor and not the Board.
Odusolu assured the lawmakers that all other documents requested would be provided at the next proceeding of the House Committee.