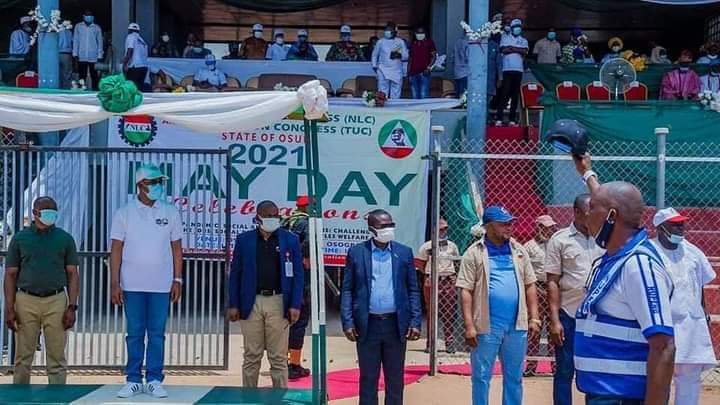 The Governor of the State of Osun, Mr Adegboyega Oyetola, has described civil servants as the indirect beneficiaries from the Osun Food Support Scheme.

Recall that the Scheme which was designed to feed 30,000 poor and vulnerable citizens once every month till the end of Oyetola’s administration, was flagged off on April 1 by Governor Adegboyega Oyetola.

But on Saturday, during the 2021 Workers Day Celebration in Osogbo, Oyetola said part of the advantages of the scheme was that it is now helping workers cater for their dependants and extended family members.

Aside the Osun Food Supoort Scheme, Oyetola also announced that his administration was working assiduously to entrench social protection programmes for the people of Osun as part of efforts to ease the burden on workers.

“Aware that ours is a society that caters for the extended family, the administration recently inaugurated the Osun Food Support Scheme, to feed 30,000 poor and vulnerable persons in the State monthly.

“We are equally working assiduously to entrench social protection programmes for our people so that, among others, we can ease the burden on our workers who have enormous responsibilities for their dependents”, Oyetola posited.