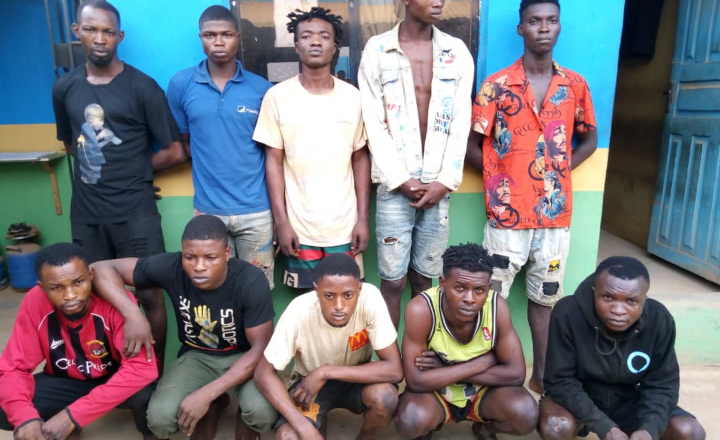 The Ogun state command of Nigeria Police Force have apprehended a gang of ten men,who have been terrorising the people of the community.

The suspects who are also cult members,have been using dangerous weapons to dispossessed members of public of their belongings.

According to a release by the Public Relation Officer of the command,DSP Abimbola Oyeyemi,said “The suspects; Moses Johnson, Chinedu Okechukwu, Oka James, Mathew John, Moses David, Fuhad Sulaimon, Joseph Emmanuel, Stephen Samuel, Ozon Austin and Ope Taiwo were arrested following a complaint lodged at Ogijo divisional headquarters by one Olaojo Emmanuel who reported that on the 4th of February 2021, that he was attacked with his wife  by a group of men at about 9;30pm and dispossessed of his Iphone 7 plus valued #130, 000, 00 at gun point. “

The release added that,”the complainant stated further that he sighted some of those people who robbed him at Ita Oluwo area of Ogijo. On the strength of his report, the DPO Ogijo division CSP Muhammed S. Baba mobilized his men and moved to the scene where ten of the hoodlums were apprehended.”

It was reported that some victims of their atrocities have come forward to identify them as those who robbed them at different times.

Meanwhile, the commissioner of police, CP Edward Awolowo Ajogun has ordered the immediate transfer of the suspects to state criminal investigation and intelligence department for discreet investigation and diligent prosecution.