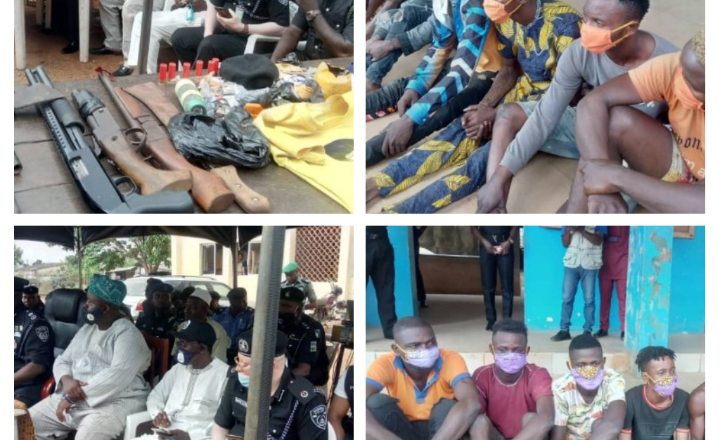 …restore peace,calmness in Ijebu-ode and environs.

The Ogun state police command have parraded some suspected cult members,armed robbers,kidnappers terrorising Ijebu-ode and nearby communities.
The state Commissioner of Police,CP Edward Ajogun while addressing Community leaders, traditional rulers and other stakeholders,made it clear that the state would not be conducive for criminals and law breakers.
He said the police were on top of the situation in curtailing the violence of cultist.He made it known that,”to curtail the violent activities and confrontation of the cult groups,the command has cracked down on the members heavily; affected arrest of many,some with their arms and ammunition.”
The Commissioner gave an instance,”on the 9th of January,our men in Ijebu-ode had a gun duel with Aiye Confraternity,in which one of them met his doom.Two others were arrested,two locally made shot guns and six live cartridges were recovered.Precisely,in the past one month in Ijebu-ode and environs,16 suspected cultists were arrested,some already undergoing prosecution on murder,attempted murder,armed robbery,and cultism, while not less than 6 firearm and 15 live cartridges as well as battle axes were recovered.”
The police boss warned,”that anyone nursing the ambition of joining them,the command is all out for you all.We are determined; battle ready. Henceforth,any person,cultist or not found with weapon,or displaying weapon in the public,or using same to maim or kill in Ijebu-ode environs,indeed in any part of the state,will be dealt with in the most decisive manner.”
The Commissioner appealed to the general public to provide the police with the right information so as to check mate the disturbing activities of the hoodlums which is portraying Ijebu ode and it’s environs in bad light.